Trending in China: Merchants and Netizens Forced to Pick Sides in Fight Between Delivery Firms 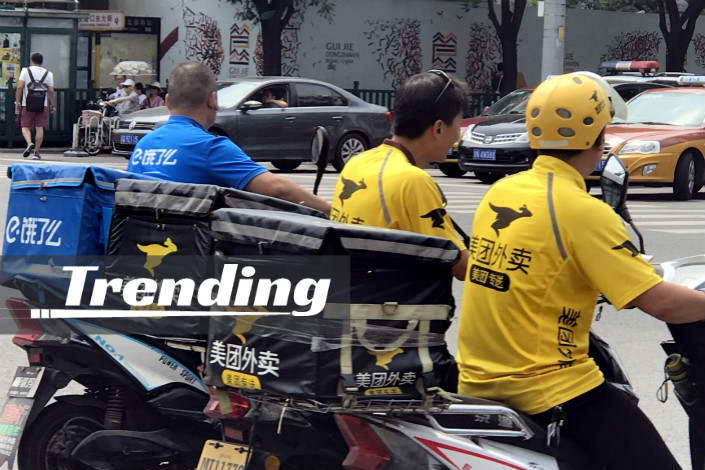 The rivalry between two of China’s largest food delivery services Meituan Dianping and Alibaba-owned Ele.me has found a new battleground—the courthouse, with the latter suing the former for unfair competition. Ele.me has accused Meituan of threatening restaurants that if they want to appear on their app they have to end any collaboration with Ele.me and has demanded one million yuan ($143,900) in damages. However, Ele.me might not be as innocent as first appears.

According to Ele.me, Meituan has been sending slanderous messages against Ele.me to restaurant owners as well as forcing them to choose between the two apps. Ele.me claimed that Meituan’s behavior greatly damaged its profits and that Meituan must immediately stop the alleged “unfair” competition, pay damages and litigation fees, and apologize publicly. The case is currently under review at the Haidian District People’s Court in Beijing.

But yesterday, many people who rushed to criticize Meituan based on Ele.me’s lawsuit were given pause for thought after a letter of complaint from 20 merchants in the city of Wenzhou went viral on Weibo. “We have long been exploited by Ele.me… If we partner with multiple food delivery platforms, Ele.me will remove us from their app or even fine us,” the letter read. “We are forced to sign exclusive deals with Ele.me.” The vendors have asked market regulators to step in and “restore order in the local food delivery industry.”

While a final ruling is still pending, the lawsuit illustrates the way that competition between Meituan and Ele.me has become increasingly intense and creative. The two companies are fighting for attention on the streets by offering creative headgear to their takeaway riders—floppy kangaroo ears for Meituan versus Doraemon-style propellers for Ele.me. The battle also rages online, where Meituan was accused of appropriating the stories of Ele.me deliverymen for its own publicity in the form of web comics.

Ele.me’s allegations have been further complicated as people recall that Alibaba, the e-commerce giant that owns the delivery firm, has forced plenty of vendors to use its services exclusively in the past. Last November, top microwave-oven maker Galanz sued Alibaba for demanding it to choose between selling products on either Alibaba’s Tmall or upstart rival Pinduoduo. Prior to the Galanz lawsuit, which was later settled, JD.com had also complained that Alibaba pressured merchants to “pick sides” between the two rivals.

Netizens are eagerly “picking sides” as well. Some people mocked Ele.me for accusing others of unfair practices despite its own wrongdoings, while others suspected that Meituan paid to have the letter of complaint go viral on Weibo as a PR move. Still others argue it’s meaningless to debate which company is the greater evil. “Merchants would want to raise prices if they can only operate on one platform. In the end, it’s us consumers who will have to pay,” one user wrote.