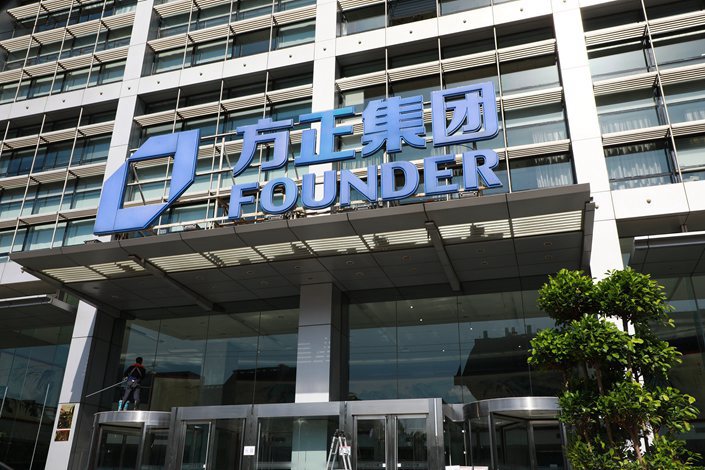 PUFG's Beijing headquarters on May 10.

The bailout and restructuring of state-owned Peking University Founder Group Corp. (PUFG), the biggest Chinese defaulter of U.S. dollar bonds in almost two decades, has taken another step forward with the whittling down of potential strategic investors to a short-list of four, sources with knowledge of the matter told Caixin.

However, the court-appointed bankruptcy administrator charged with putting together a reorganization plan, may need to further delay the deadline to present it to the company’s creditors, the sources said. The proposal was originally due to be handed out in November but that may now be pushed back, probably to the period around Spring Festival in February 2021, partly because the deadline for creditors to report how much they are owed has had to be extended until Oct. 4, they said.

PUFG, which is owned by Peking University, one of China’s oldest and most prestigious tertiary institutions, is undergoing a bankruptcy reorganization after a Beijing court in February accepted an application by one of its creditors to restructure the indebted technology conglomerate. The court designated the central bank and several other regulatory authorities to form a reorganization team as the bankruptcy administrator.

The list has now been narrowed down to four, Caixin has learned, and the companies selected are likely to be Zhuhai Huafa, Taikang Life Insurance, Shenzhen Investment, and Zhongze Holding.

PUFG, which started out as a hardware developer, embarked on a highly leveraged expansion strategy that took it into activities spanning information technology, pharmaceuticals, real estate, and finance. It is now drowning in debt and owes billions to banks and to holders of onshore and offshore bonds. Analysts from S&P Global Ratings Inc. said in a report earlier this month that PUFG was the biggest Chinese defaulter of U.S. dollar bonds in almost two decades.

As of Aug. 19, a total of 478 creditors had reported to the bankruptcy administrator that they are owed a combined 187.9 billion yuan ($27.8 billion), according to a PUFG statement (link in Chinese). As of November 2019, PUFG had interest-bearing debts of about 190 billion yuan, according to data it reported to regulators and seen by Caixin.

PUFG’s bankruptcy administrator said in August that it would not recognize $1.7 billion of dollar bonds issued by two overseas subsidiaries as its own debt. PUFG did not directly provide a guarantee for the bonds but signed keepwell deeds, which usually serve as “letters of support” used by Chinese companies to facilitate offshore bond sales by subsidiaries.

Caixin has learned from sources familiar with the matter that PUFG has assets in Zhuhai, a city in the southern Guangdong province, and that local state-owned entities are interested in acquiring some of them. Taikang Life Insurance might have its eye on assets in the fields of medicine and real estate, while Zhongze Holding is interested in real estate resources, sources told Caixin.

Shenzhen Investment has been actively looking at taking stakes in troubled companies. It did show initial interest in investing in Baoshang Bank Co. Ltd. when the regional lender collapsed, Caixin has previously learned, although later withdrew. In 2018, it planned to buy shares of state-owned chipmaker Tsinghua Unigroup Co. Ltd. from Tsinghua Holdings Co. Ltd., the business arm of Tsinghua University, but the deal didn’t go through.

Many of China’s once high-flying state-owned enterprises (SOEs) that expanded rapidly in a period of easy money are now in trouble as slowing economic growth has made it more difficult for them to pay back their debts. Local governments, struggling with weak fiscal revenue and controls on their ability to raise money via investment vehicles, are also less able to bail out struggling SOEs than they once were. In February, a company owned by the Qinghai provincial government tried to persuade investors in another Qinghai SOE to sell back defaulted bonds at a sharp discount.