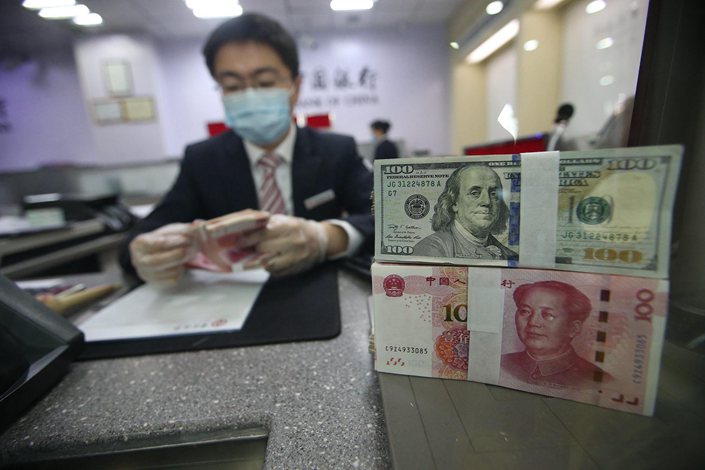 The yuan’s recent surge to a 16-month high against the U.S. dollar has about as much to do with the U.S. Federal Reserve as China’s own unexpected economic strength during the pandemic.

The Chinese currency, also known as the renminbi, hit that high on Tuesday, recovering from the low for the year it plumbed in May, when China was recovering from its own coronavirus epidemic.

“The stronger yuan this year has been driven mostly passively due to the weaker dollar, rather than actively,” said (link in Chinese) Xu Xiaoqing, director of macro strategy at Zhejiang province-based investment firm DH Fund Management Co. Ltd.

As of Thursday, the U.S. Dollar Index, which gauges the value of the greenback against a basket of major currencies, was down more than 6% since May, and several analysts predicted that it could fall as much as 9% from May’s level in the short run.

While China’s central bank has promised to maintain a “normal” monetary policy to keep financial risks in check, the Federal Reserve has engaged in massive stimulus that has lowered long-term interest rates in the U.S., making dollar-denominated assets less appealing (link in Chinese) to investors, according to Xiao Lisheng, chief macro researcher at Chinese brokerage Pacific Securities Co. Ltd.

From early May to Thursday, the spread between the yields on 10-year Chinese government bonds and their U.S. counterparts widened by about one-third to 2.5 percentage points.

That growing spread has made investments in yuan-denominated assets more enticing than those priced in dollars, driving more investors to the Chinese market and leading to the yuan’s further appreciation against the greenback.

Still, the yuan’s recent strength isn’t all due to the Fed. The Chinese economy has performed far better than expected in the face of both the Covid-19 pandemic and widespread flooding across southern China. Major indicators including consumption, industrial output and investment continued to recover in August, according to data released Tuesday.

As the yuan has appreciated, more Chinese exporters have been scrambling to convert foreign currencies into local currency, several traders said. “(Export) enterprises have been settling large amounts of foreign exchange recently to cut their losses,” said a foreign exchange director at a foreign-funded bank.

In July, banks settled $115.1 billion in foreign exchange for goods traders, the highest since January, according to the latest data (link in Chinese) from China’s foreign exchange regulator.

Still, an appreciating currency isn’t good news for everyone. Amid concerns that a strong yuan will become a drag on China’s economy, particularly its export sector, multiple analysts expect the currency’s appreciation will slow going forward as the U.S. economy recovers and as tensions mount between the world’s two largest economies.

With the American economy starting to recover, the U.S. Dollar Index may experience a short-term rebound, thus inhibiting yuan appreciation, according to Wang Youxin, a researcher at Bank of China Ltd.’s Institute of International Finance.