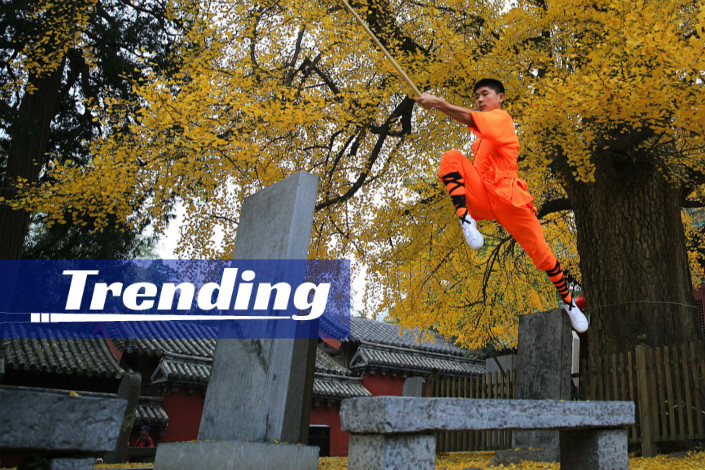 The clothing company Semir, owner of China's leading children's clothing brand Balabala, was this month accused of IP theft in an open letter by Songshan Shaolin Temple, which took aim at its “Shaolin Kungfu” emblazoned items. Shaolin Temple said it was going public because it had been earlier rebuffed when it asked Semir to drop the clothing line, which launched in August.

Over the past 23 years, the Henan temple complex considered the birthplace of the Buddhist martial art of Shaolin boxing, has registered 666 trademarks, spearheaded by its controversial head monk, and criticized for commercialism by religious and cultural purists.

Falling afoul of a litigious cultural body threatens to compound an already bad year for Semir. Affected by the pandemic lockdown, the Zhejiang-headquartered firm closed a tenth of its 7500 stores in the first half of 2020 and saw net profit drop 97% year-on-year to 21.6 million yuan.

Although many companies try to pair up with cultural sites such as the Forbidden City or Dunhuang Caves, the birthplace of kung fu has not taken kindly to “unsolicited collaborations.” The company was accused of not informing or obtaining authorization from Shaolin Temple when using the words “Shaolin Kungfu” in its “National Wave” leisure range.

This is not for want of commercial savvy on the part of a temple made famous for training Bruce Lee and Jackie Chan, and the use of Shaolin stunts in multiple films. The temple’s abbot, Shi Yongxin, dubbed “the CEO of Shaolin” and “the Buddhist Monk with an MBA,” has ushered in a global era for the martial art by acquiring land and property overseas.

People responding to the tale on Weibo have accused Shaolin Temple of cybersquatting on Shaolin-related trademarks. The comment, “Shaolin Temple appears to have registered the trademark to prevent other companies from using it. Apart from the specialty walnut cake, there really aren’t any other products it can use to trap the money demon” received seven thousand likes.

Addressing the growing commercialism of cultural sites in China another commentator wrote, “Wake up friends who are filled with anger and outrage: The Qing palace is selling tickets for its exhibitions. In two days, it will celebrate its 600th anniversary.”

A comment further down the list praised Shaolin temple for getting serious about its brand reputation, saying “Disney has done a great job of protecting trademarks. Why can’t Shaolin Temple? People imitating Shaolin to sell medicine and food should be stopped…It is very difficult for China to produce a world-class brand, if brands can’t be protected.”

Shaolin trademark infringements are undoubtedly rife, with one social media user highlighting their use to sell alternative therapies. “Hurry up and deal with that ‘Shaolin thirteen moxibustion’ trademark issue: [Local station] Liaoning TV is advertising it every day.”