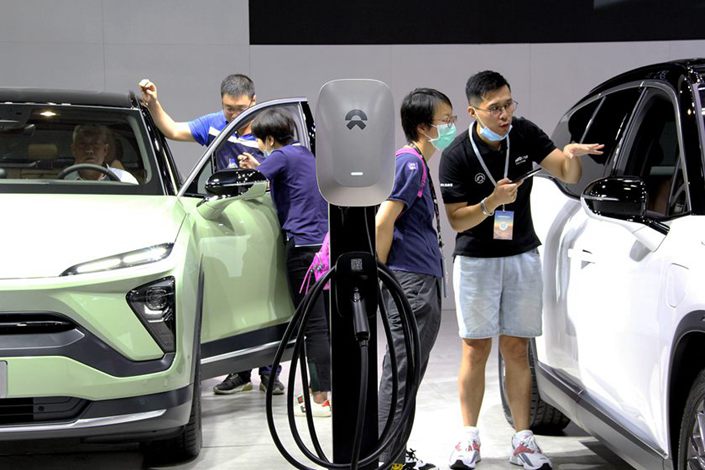 Nio’s shares jumped last week on news that the company delivered more than 5,000 cars in October, doubling its sales year-on-year.

Demand for Chinese electric-car makers’ U.S. stocks has soared in recent weeks, in a sign that investors are betting on the long-term prospects of the emerging sector after several companies reported better-than-expected sales in October.

Nio’s shares jumped last week on news that the company delivered more than 5,000 cars in October, doubling its sales year-on-year. By comparison, General Motors sold 771,400 cars in the third quarter in the Chinese market alone.

Li Bin, Nio’s founder and president, said Friday that rising electric vehicle (EV) stocks show that such vehicles establishing a greater foothold in the market is an inevitable trend.

Market observers projected that EV demand in China is likely to remain robust as the central government looks to make the vehicles account for 20% of all new car sales by 2035, up from just under 5% last year. To this end, the government has also supported the construction of EV charging stations, of which there were 42,000 nationwide as of September, government data showed.

Nio plans to double its number of production shifts from this month, CEO Qin Lihong said. This “does not necessarily mean the company will produce and sell 10,000 cars immediately,” he said, but is simply a move to prepare for potential demand growth.

Continuously growing demand for its vehicles would represent quite a turnaround for Nio, which in recent years has been beset by production, legal, financial and sales problems. The company, which produces cars in partnership with state-owned JAC Motors in Hefei, capital of Anhui province, signed a deal with the city’s government in February in which it promised to move its China headquarters there in return for financial support.

In the wake of that agreement, it struck another deal for 7 billion yuan of funding from state-backed investors, who took a 24.1% stake in a new Hefei-based company which would hold Nio’s core assets and businesses in China.