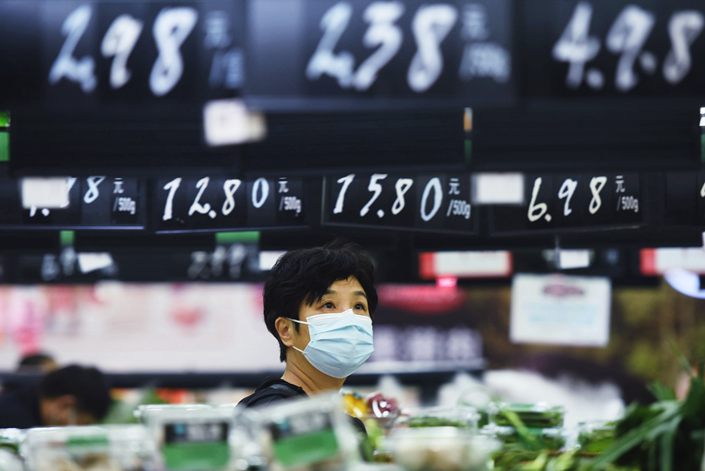 China’s consumer prices rose at the weakest pace in 11 years last month, with pork prices down for the first time in 20 months as the impact of African swine fever faded out, official data showed Tuesday.

The consumer price index (CPI), which measures changes in prices of a select basket of consumer goods and services, rose 0.5% year-on-year in October, lower than the 1.7% increase the previous month and the lowest reading since October 2009, according to data (link in Chinese) released by the National Bureau of Statistics (NBS).

The reading was slightly lower than the median estimate of 0.7% growth in a Caixin survey (link in Chinese) of economists.

The substantial slowdown in CPI inflation was due primarily to a combination of declining pork prices and a high base from October of last year, the NBS said in an accompanying statement (link in Chinese).

Pork prices dropped 2.8% year-on-year in October, reversing a 25.5% rise the previous month, official data show. The largest pork consumer in the world, China had seen pork prices rise continuously since March 2019, more than doubling in some months as the African swine fever outbreak caused supply shortages. That virus was a key driver of consumer inflation over the past year.

If pork prices were excluded, consumer inflation already bottomed out in July at 0.4% year-on-year and remained stable at 0.7% from August to October, economists at Nomura International (Hong Kong) Ltd. wrote in a Tuesday note.

The core CPI — which excludes more-volatile food and energy prices and may better reflect long-term inflation trends — remained stable last month, rising 0.5% year-on-year, as it did for the previous three months.

They added that demand-side pressures for prices to rise are likely to be higher in the following months given “the rebound in consumption and ongoing infrastructure-led stimulus.”

Factory gate prices continued to shrink amid falling global oil prices. The producer price index (PPI), which gauges changes in prices of goods circulated among manufacturers and mining companies, dropped 2.1% year-on-year in October, the same pace as the previous month, official data (link in Chinese) show. The reading was also lower than the median estimate of a 2% drop in the Caixin survey.

The price decline widened in the oil and natural gas extraction sector, falling 30.4% year-on-year last month, 4.2 percentage points more than in September, according to the NBS statement.

Declines in oil and metal prices offset rises in most other goods’ prices, the economists with Capital Economics said.