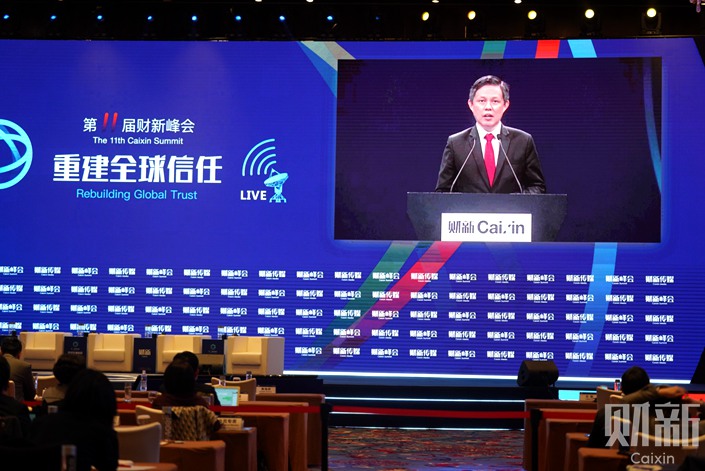 The pandemic has caused a global trust crisis, Chan said at the Caixin Summit in Singapore on Friday. Domestically, the pandemic has eroded people’s trust in their own governments, and internationally, countries’ trust in multilateral institutions and platforms has also diminished, he said.

“As one of the world’s largest economies, China now has a historical opportunity to win global trust by identifying a standard of behavior towards global trade,” said Chan. That could be realized by opening markets, sharing technologies and enhancing regional cooperation, he said.

To underpin economic recovery, some countries isolated themselves and shifted supply chains closer to home. “We believe greater economic resilience comes from supply chain diversity and greater interdependence, not self-isolation or independence,” he said, calling to rebuild global trust.

Chan’s remarks came amid rising geopolitical tensions and looming decoupling between China and the U.S. Other countries, such as Japan, have also rolled out policies encouraging companies to bring production back home, after some multinational firms were impacted by the Covid-19 epidemic in China early this year.

Chan said economic independence is not a viable option. Over the past few years, the rule-based multilateral trading system has brought economic growth, stability and peace to many countries. If every country single-mindedly pursues economic independence and disregards their neighbors, the world would be worse off, he said.

He added that global economies have shared interests and countries should try not to “build a cart behind closed doors,” a Chinese idiom referring to disregarding the outside world.

Chan said that the world is closely watching China’s dual circulation strategy, a buzzword which emphasizes both domestic consumption and opening-up. He said that the strategy is in line with China’s economic trajectory and also brings more opportunities to the global market.

Chan further discussed Chinese President Xi Jinping’s commitments earlier this month to deepen bilateral, regional and multilateral cooperation. “We look forward to China’s contribution for the global trade integration, and for great prosperity of the Chinese people and for the world,” he said.