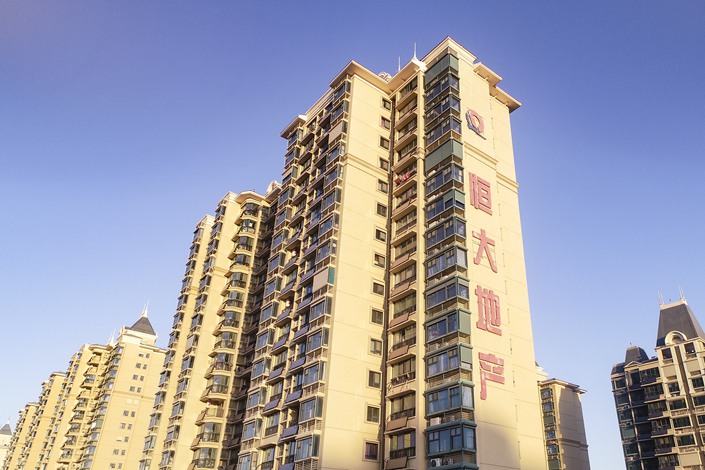 China Evergrande Group’s property management arm is looking to raise up to HK$15.8 billion ($2 billion) in a Hong Kong IPO next month, the company said Sunday.

Such moves could help Evergrande ease its liquidity pressure and pay down its debt. At the end of June, it had 835.5 billion yuan in borrowings — with about 47.4% maturing before June next year — up from nearly 800 billion yuan at the end of last year, the company’s interim report showed.

Evergrande was on a debt binge until a key source of funding — trust loans backed by pools of capital from mostly wealthy investors to invest in property projects — dried up in August. That sparked fears of a liquidity squeeze, causing its shares and bonds to tumble.

“Given that the firm’s investors include major central and local state-owned enterprises, its default would send shockwaves to other sectors and risk destabilizing the entire financial system,” Rosealea Yao, a senior analyst at global research firm Gavekal, wrote in a Sept. 30 note. The firm’s “too big to fail” status “illustrates the balancing act the government faces as it tries to pressure developers to get their finances in order while avoiding defaults that would ripple throughout the Chinese economy,” she wrote.

Hu Liang, an executive director and general manager of Shenzhen-based Evergrande Property, said that the company has secured 23 cornerstone investors to subscribe to a total of 790 million shares, about 48.7% of the total issuance.

Shares of Evergrande Property Services Group Ltd. are priced in the range of HK$8.5 to HK$9.75 per share, and trading will begin Dec. 2.

About 65% of the proceeds raised from the IPO will be used to fund strategic mergers, acquisitions and investment, said Wang Zhen, an executive director and deputy general manager of Evergrande Property.

In addition to the IPO, Evergrande Group has been taking actions to ease its liquidity squeeze through asset sales and investor deals. The cash-challenged developer dodged yet another bullet earlier this month, as strategic investors gave it some breathing room after its plan to raise money through a Shenzhen backdoor listing collapsed.

Hong Kong-listed Evergrande Group said in a Sunday filing to the bourse that more investors have agreed not to enforce a commitment the company made to pay them billions of dollars if it didn’t list.

Under a plan to boost its valuation that was four years in the making, Evergrande Group aimed to complete the so-called backdoor listing in Shenzhen by injecting almost all of Hengda Real Estate’s property assets into a shell company.

Evergrande had promised to buy back the total 130 billion yuan of Hengda Real Estate stakes held by investors if it didn’t secure regulatory approval for a listing by Jan. 31, 2021.

Evergrande said in the Sunday filing that strategic investors holding equity interests worth 125.7 billion yuan have entered into supplemental agreements to hold their shares as ordinary shares. Evergrande has paid the principal in cash and bought back 4.3 billion yuan of Hengda Real Estate equity, according to the filing.

One element of the company’s crisis that has particularly drawn the market’s attention is the state aid it has received. Shenzhen Talents Housing Group Co. Ltd. and Guangzhou City Investment Co. Ltd., both backed by local governments in Guangdong province, have agreed to buy equity worth 20 billion yuan and 10 billion yuan respectively from a consortium of investors, according to the filing.

Shenzhen Talents Housing will buy part of the equity from Shanghai-listed infrastructure company Shandong Hi-speed Co. Ltd. On Sunday, Hi-speed said in a filing (link in Chinese) with the Shanghai Stock Exchange that its investment fund will sell the 1.18% equity the fund holds in Hengda Real Estate for 5 billion yuan.

Shandong Hi-speed previously poured about 23 billion yuan into Hengda Real Estate, but it didn’t disclose what it plans to do with the rest of equity. A source with knowledge of the matter told Caixin that Shandong Hi-speed eventually plans to sell all its holdings but it only disclosed part of its deals in the latest announcement.

Evergrande’s mounting debt issues came into the spotlight when it was one of the 12 top developers that regulators summoned to a meeting in late August, notifying them of a “three red lines” policy aimed at limiting real estate companies’ ability to take on more debt.