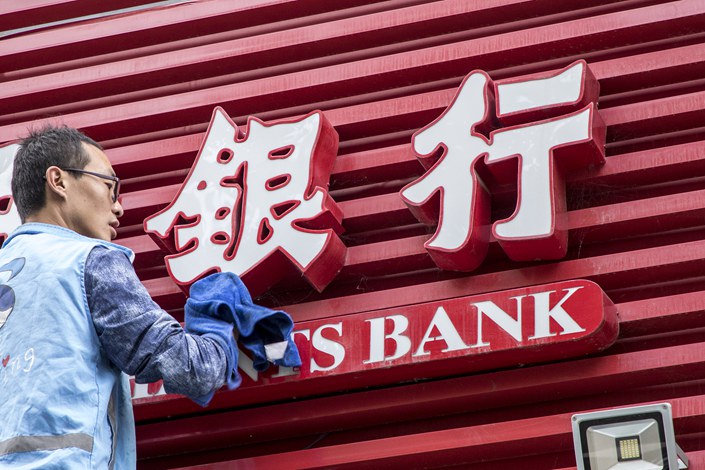 China’s regulators have taken another step forward in their efforts to monitor and contain risks in the financial system, releasing rules that will be used to judge which of the country’s banks are deemed too-big-to-fail.

The Assessment Measures for Domestic Systemically Important Banks were jointly issued Thursday by the People’s Bank of China (PBOC) and the China Banking and Insurance Regulatory Commission (CBIRC) and will go into effect on Jan. 1, 2021. They provide a set of standards and criteria to evaluate lenders and enable regulators to identify which need to be included in a list of domestic systemically important banks (D-SIBs). Those on the register will be subject to additional, yet to be announced, regulatory requirements in terms of capital, leverage ratios and information disclosure, according to a separate statement (link in Chinese).

“The purpose of the assessment is … to reduce the possibility of major risks in systemically important banks and prevent systemic risks,” the document said. D-SIBs are those who provide irreplaceable key services in the financial system because of their huge scale, high complexity in business structure and strong connection with other financial institutions. If a D-SIB “encounters a significant risk event and cannot continue to operate, it could have an adverse impact on the financial system and the real economy,” according to the document.

Leaders of the Group of 20 nations agreed to step up supervision of large financial institutions after the global financial crisis that began in 2007, aiming to ensure that the failure of a single major institution couldn’t lead to a financial crisis and destabilize the international financial system. The Financial Stability Board (FSB) was tasked with developing a policy framework to strengthen scrutiny of global systemically important financial institutions (G-SIFIs), while the Basel Committee on Banking Supervision developed a methodology to identify banks and set out tougher standards that they would need to comply with. The Basel committee also compiled a set of principles to guide national policymakers to identify domestic SIFIs. Five Chinese institutions including the four largest state-owned commercial banks and Ping An Insurance (Group) Company of China Ltd. are included on the FSB’s list of G-SIFIs.

As the world’s second-largest economy and home to four of the 10 biggest commercial banks, China has become a key part of the global financial system and these latest rules are part of its commitment to comply with international standards and regulations. The PBOC and CBIRC released guidelines on the regulatory treatment of D-SIFIs in November 2018, setting out how they should be identified and supervised to limit the risk of contagion in the financial system. A draft of the D-SIBs measures released on Thursday was published in November 2019 (link in Chinese) and in September 2020, the PBOC issued draft measures for the country’s global systemically important banks (G-SIBs) to ensure they have adequate capital buffers to absorb losses without the need for a state bailout should they suffer a crisis.

Under the latest measures, D-SIBs will be selected in two ways –– either they are among the top 30 biggest banks based on a scoring system that includes the size of their total assets including off-balance sheet assets, or they were on the D-SIBs list the previous year. Those who make it onto the list will face stricter regulatory requirements in terms of capital ratios and information disclosure. They will be required to report their annual accounting data for the last fiscal year to the CBIRC before the end of June the following year for verification and sharing with the central bank.

The CBIRC will grade banks on four aspects: business scale, interconnectedness with other financial institutions, irreplaceability and complexity. Scores will be given for items including total assets, assets and debts formed through transactions with other financial institutions, number of customers and domestic outlets, and the outstanding value of their derivatives and wealth management products.

Banks who make the D-SIBs list will be given time to comply with the tougher requirements to ensure that the measures are implemented in a prudent and orderly manner, the document said. An “early correction mechanism will also be set up to encourage systemically important banks to reduce their complexity and systemic risks, establish a sound internal capital restraint mechanism, enhance banks’ ability to withstand risks and absorb losses, improve their ‘self-rescue’ capabilities, and prevent ‘too big to fail’ risks,” it said.

The final measures contain some changes from the 2019 draft. For example, the minimum score for a bank to be classified as a D-SIB has been amended to 100 from 300. The change signals that regulators are tightening supervision to guard against growing regional risks from small- and midsized banks, analysts with Guosen Securities Co. Ltd. wrote in a Friday research note. The change will likely enlarge the list of D-SIBs to 20 banks from a previously expected 13, analysts with Minsheng Securities Co. Ltd. said in a note published Friday.

The CBIRC and the PBOC will jointly release a list of D-SIBs each year after obtaining approval from the State Council’s Financial Stability and Development Committee, the document said.