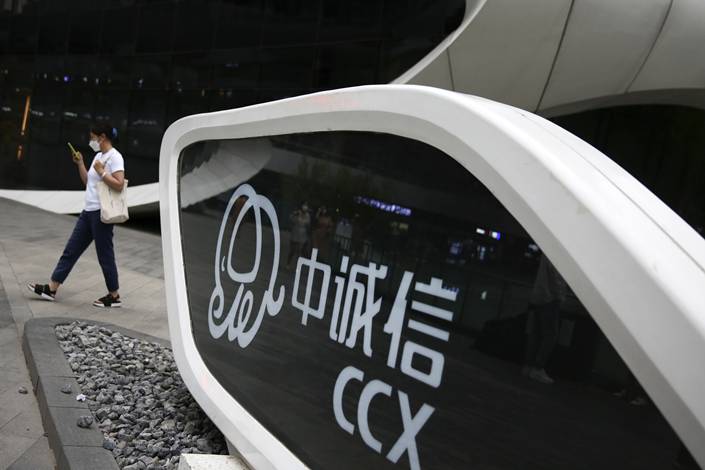 China Chengxin and other Chinese ratings agencies have come under fire for failing to give companies the ratings they deserved.

In the wake of the market-rocking bond default by state-owned miner Yongcheng Coal last November, one particularly unsettling fact stood out.

Just one month before the cash-strapped state-owned enterprise (SOE) revealed it couldn’t repay the 1.03 billion yuan ($159.5 million) in principal and interest due on Nov. 10, it had received the highest AAA rating from China Chengxin International Credit Rating Co. Ltd. — one of the country’s top ratings firms.

That fact raised an obvious question: Just how did a ratings company, which sells itself as an impartial evaluator of corporate financial health, manage to get it so wrong?

As more companies defaulted in the weeks that followed, China Chengxin and other Chinese ratings agencies came under fire for failing to give companies the ratings they deserved. On Dec. 29, a self-regulatory body banned China Chengxin from rating any new interbank bonds for three months over misconduct related to the Yongcheng Coal default.

Flawed rating methodology, conflicts of interest and corruption have all played a role in the industry’s recent failures, but structural problems in the bond market itself, including regulator meddling, are just as responsible for China’s ratings woes, according to multiple people familiar with the industry.

The ratings inflation problem exposed by last year’s wave of defaults presents a challenge for policymakers and regulators because of how severely it undermined investor confidence in China’s roughly 25 trillion yuan nonfinancial corporate bond market, triggering sell-offs and making it harder for many SOEs to raise money.

“We basically don’t trust other people’s ratings anymore,” a bond investor at one brokerage told Caixin.

Yongcheng Coal and Electricity Holding Group Co. Ltd. was not the only company to hold a high rating from China Chengxin before defaulting. When another large SOE, Tsinghua Unigroup Co. Ltd., defaulted on a 1.3 billion yuan bond on Nov. 16, it had AA rating, only recently downgraded from AAA a few days earlier (link in Chinese).

These abrupt defaults of SOEs with high ratings sent shockwaves through China’s corporate bond market. In November, 100.4 billion yuan of corporate bond issuances were either canceled or delayed nationwide, up from 34.3 billion yuan the previous month.

“Domestic ratings firms have to some extent failed,” one bond market participant told Caixin. “They pretty much don’t lower an enterprise’s until it has already failed to repay its debt.”

The participant was alluding to a phenomenon in China known as the “ratings cliff” (评级悬崖). This is best described as rapid succession of downgrades that ratings agencies give to a company — but only after it misses a debt payment. Investors and international ratings firms take a dim view of the practice, as the whole point of a ratings downgrade is to serve as an early warning for investors.

In the case of Yongcheng Coal, China Chengxin pared its AAA rating for the company by five notches to B in less than a month after the Nov. 10 default. International rating agencies define any rating below BBB- as below investment grade, or junk. But China’s industry uses a different scale and doesn’t define investment grade.

In another example, Dagong Global Credit Rating Co. Ltd. and Golden Credit Rating International Co. Ltd., two other Chinese ratings firms, each slashed their ratings (link in Chinese) for Brilliance Auto Group Holdings Co. Ltd. three times over the course of a month after the state-owned automaker missed repayment on a bond in October.

There are two major causes of China’s ratings inflation problem, according to the market participants interviewed by Caixin. The first are the “structural flaws” in the bond market, which include regulator meddling.

Some officials have been reluctant to let ratings agencies issue downgrades because they fear that any loss in confidence in a company could end up adding risk to the financial system, sources with knowledge of the matter told Caixin.

When some cash-strapped enterprises raise funds, ratings firms often find themselves under pressure if they want to lower their ratings as it would make it harder for the enterprises to borrow, according to an executive at a ratings firm.

In 2018, several ratings firms detected risks in some asset-backed securities (ABS), a kind of bond-like financial product, and reported the issues to the securities regulator, but the regulator did not let them lower the ratings on the products due to concerns about fueling negative market sentiment, sources in the rating industry have said (link in Chinese).

If rating firms actually rated bonds and their issuers based on the fundamentals of the issuers’ operations, many local SOEs and local government financing vehicles would have trouble raising money once their ratings fell below AA-, which could in turn trigger defaults, a regulatory source said.

That’s because there are a large number of SOEs that issue new bonds to repay old ones, multiple industry participants said.

“If the bubbles in the ratings industry were to pop, SOEs would no longer have a way to refinance their debt,” the regulatory source said.

Furthermore, many of those SOE bonds end up packaged in investment products that ultimately get bought by individual investors. If an SOE were to default on one of those bonds, their investors would end up footing part of the bill, which is a main reason why regulators are so concerned about poor ratings causing systemic risks, multiple industry participants said.

“We have to talk with the regulators before we can lower our ratings, or the regulators will criticize us for generating systemic risks,” the ratings firm executive said.

Besides regulatory meddling, the structure of China’s bond market has also contributed to the ratings inflation problem, the regulatory source said.

China has two major bond markets: the interbank bond market, which is by far the largest and is regulated by the PBOC, and the exchange bond market which is supervised by the China Securities Regulatory Commission (CSRC) and operated by the Shanghai and Shenzhen stock exchanges. The two markets compete for issuances, a senior bond market participant said.

Last month, former Finance Minister Lou Jiwei criticized this division (link in Chinese), saying that the situation could lead the two markets to lower their regulatory standards in order to grab a larger share of the bond issuances.

One problem is that financial regulators have made rules that restrict poorly rated issuers’ presence in the bond market. For example, the CSRC prohibits (link in Chinese) nonprofessional investors from buying corporate bonds with ratings below AAA in the exchange market. The situation puts pressure on the ratings firms to shy away from giving low ratings so that issuers don’t lose access to the market, sources said.

“It seems that only regulators need the ratings agencies, while the markets do not need them at all,” a senior market participant said.

The other major cause of the ratings inflation problem comes from the ratings firms themselves.

Ratings firms compete for clients. Because all businesses have an incentive to keep their customers happy, the ratings firms are under pressure to give out high ratings to secure clients. In the third quarter of 2020, 136 bond issuers changed ratings firms, according to a report (link in Chinese) by the National Association of Financial Market Institutional Investors (NAFMII), a central bank-backed self-regulatory body for the interbank market. Of those, 17 received higher ratings from their new rating agency,

In the report, the organization warned the ratings agencies that they must “refrain from improper competition.”

Of the 14 domestically invested ratings agencies in China at the end of the third quarter last year, 10 operated under the business model (link in Chinese) in which issuers paid them to rate their bonds. The others make their money by selling their bond ratings to investors.

Of the 10, China Chengxin, Shanghai Brilliance Credit Rating and Investors Service Co. Ltd., and China Lianhe Credit Rating Co. Ltd. rated most bonds in the third quarter, according to the report.

Regulators have also criticized some ratings firms for flaws in their methodology and quality control systems. NAFMII has accused (link in Chinese) China Chengxin of failing to conduct an on-site investigation of Yongcheng Coal and look into abnormalities like its delayed payments of employee wages.

A major problem in the methodology of ratings firms is that they have trouble judging how willing local governments are to bail out local SOEs, several industry participants said. In the past, investors were confident that SOE bonds were a safe investment based on the assumption that local governments would always ride to the rescue if one of their SOEs ever came close to defaulting. However, Yongcheng Coal’s default blew a hole in that assumption as it showed that some local governments could either unable or unwilling to bail out weak SOEs.

How to reflect the uncertainty of a local government bailout in their ratings is something that ratings firms need to figure out, an executive at a ratings agency said.

Conflicts of interest and corruption are another problem for the industry. In December, the country’s top anti-graft watchdog said (link in Chinese) that two senior executives at Golden Credit Rating International Co. Ltd., a state-owned ratings firm, were removed from their positions for allegedly taking bribes in exchange for inflating the ratings of a number of companies.

In 2018, the Beijing branch of the CSRC accused Dagong Global of having conflicts of interest (link in Chinese) in its ratings business. The regulator said that 13 of the Dagong Global’s ratings clients had bought some of its other products or services, and in some cases, the firm had raised their ratings. As punishment, the regulator banned the firm for doing new ratings business for a year.

The situation is unusual, according to Liao Qiang, an industry insider who worked for years at ratings agency S&P Global Inc. The kinds of conflicts of interest that some of these ratings firms have are something you rarely see at companies with effective corporate governance.

“(The existence of these conflicts of interest) shows that their internal controls have totally failed,” Liao said.

Some industry insiders said that in order to solve the industry’s problems, regulators not only need to strengthen supervision over the ratings agencies’ integrity and due diligence, but also should consider the structural flaws of the bond market.

Regulators have allowed global ratings agencies to enter the Chinese bond market in the hope that putting more competitive pressure on the domestic industry would push them to improve their compliance and ratings methods.

Making sure that ratings agencies are truly independent in their operations and preventing interference from outside parties are the keys to solving their problems, one senior industry participant said.