HNA-Backed Hong Kong Airlines in Danger of Getting Wings Clipped 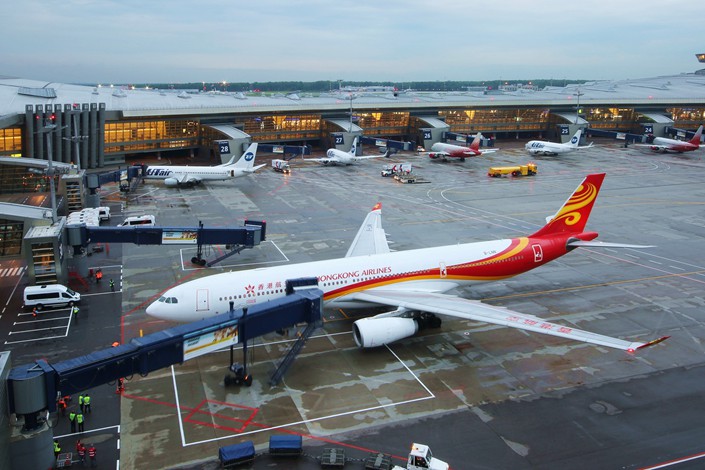 Hong Kong Airlines may again face the risk of losing its license due to financial concerns, a little more than a year after getting a reprieve from the local aviation authority. Photo: VCG

HKA is just the latest firm pushed to the brink of crisis by HNA Group’s struggles under a mountain of debt incurred during its early global spending spree that at its peak boosted total assets to 1.2 trillion yuan ($186 billion).

As requested by creditors and pending court approval, Hainan-based HNA Group may move toward restructuring under China’s bankruptcy law. A government-appointed working group expects as many as 500 companies linked to the troubled conglomerate to go into bankruptcy restructuring, sources told Caixin.

Once a prominent dealmaker in global acquisitions by Chinese companies, HNA Group attracted attention for its aggressive purchases, including stakes in hotel giant Hilton Worldwide Holdings Inc., and banking titan Deutsche Bank AG. Amid a government crackdown on debt-driven spending, HNA has since 2017 shifted focus back to its core aviation business after years of expansion that left it mired in heavy debt.

HKA is not included among the first batch of about 60 HNA-linked companies, including its major subsidiaries, that are facing similar applications to a court to force them into restructuring. Their total debts account for about 60% of all HNA-related debts, sources with knowledge of the matter said.

Hong Kong’s Air Transport Licensing Authority, however, has been closely monitoring HKA’s financial situation, and will “take appropriate action in accordance with laws and regulations” if it is no longer satisfied that HKA is able to continue to operate and meet obligations as required by its aviation license, the licensing authority’s spokesperson told Caixin on Friday.

The possible further actions include revoking or suspending the license, attaching new conditions to the license, or altering existing conditions, according to Air Transport (Licensing of Air Services) Regulations.

The aviation authority previously sent such a threat to HKA in late 2019, after the airline had been rumored to be facing financial difficulties early that year. The carrier issued a statement at that time saying it was working to fix issues related to its financial structure.

Amid its struggles, its major backer HNA Group stepped in to supply the company much-needed funds by securing some 4 billion yuan in syndicated loans prioritized for resolving its financial problems, HNA creditors familiar with the matter previously told Caixin.

Despite earlier avoiding closure, the carrier has been grappling with liquidity problems, especially as revenues shrank amid the Covid-19 pandemic.

On Jan. 25, HKA’s bond issuer announced in a filing that the carrier again deferred an interest payment on a $683 million perpetual bond due on Jan. 26. It had been previously deferred half a year ago when HKA failed to provide related financial statements. The annualized coupon rate has since been increased by about 8.6 percentage points to 15.76%, according to the filing.

HKA is operating as usual, a spokesperson told Caixin on Friday, saying the firm is aware of public concern over the activities of one of its shareholders, but that it would not be appropriate to comment as a private company.

Hainan Airlines saw a possible net loss of up to 65 billion yuan, mainly because the potential restructuring of shareholder HNA could see it lose assets, it said in an unaudited filing (link in Chinese) on Saturday.