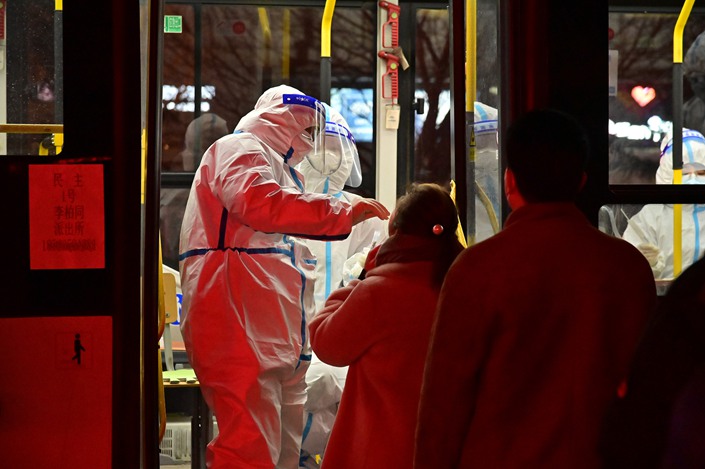 Nearly half of the hundreds of Covid-19 cases reported in a northeastern Chinese city by the end of last month stemmed from a single “super spreader” who mainly infected middle-aged and elderly people, one of whom later died from the disease, according to the official magazine of China’s main disease control agency.

The man, referred to as “Mr. L,” directly or indirectly caused 141 known coronavirus infections in Tonghua in January, says an article in CCDC Weekly, the official publication of the Chinese Center for Disease Control and Prevention. As of Jan. 31, Tonghua had reported 310 infections.

Mr. L, 44, is a traveling salesman who gave three talks over two days in mid-January to dozens of mostly retired people in Tonghua, despite previously visiting a pharmacy for symptoms of Covid-19.

He sparked a “rapidly” developing outbreak that led authorities to lock down a city district home to around 300,000 people. The article’s authors wrote that the outbreak was “directly related to Mr. L” and displayed a “clear intergenerational transmission relationship.”

Crisscrossing China on near-constant business trips, Mr. L took a train on Jan. 5 along a route linking the capital, Beijing, with the country’s northeast. While on board, he sat adjacent to two people from the northeastern province of Heilongjiang who later tested positive for Covid-19, according to the report.

Mr. L spent several days in Heilongjiang and the neighboring province of Jilin, arriving in Tonghua on Jan. 9. The following day, he visited a pharmacy, complaining of muscle pain and “other symptoms.” Pharmacy staff took his body temperature and found it to be in the “normal range.”

On Jan. 10 and 11, Mr. L gave three seminars at a small classroom in Tonghua. He did not wear a face mask, and the classroom’s doors and windows were kept closed.

A total of 97 people, aged between 60 and 87 years old, attended the talks. By Jan. 31, 74 of them — more than three quarters — had tested positive for the coronavirus. Mr. L also directly infected at least seven other contacts, including staff at the hotel where he stayed, another hotel guest and a restaurant employee. The infected people, in turn, passed the virus to at least 60 other contacts, including both second- and third-generation cases.

By the end of January, 47 “severe or critical” Covid-19 cases had been confirmed among the transmission chain, one of which resulted in the death of an 87-year-old. “Because the course participants were elderly, the outbreak had a high proportion” of such cases, the report says.

Mr. L’s exposure to other people during the highly infectious early stage of the disease, the participants’ advanced age and lengthy confinement in the crowded classroom, and the insufficient use of personal protective equipment all contributed to the severity of the outbreak, the report concluded.

On Jan. 20, authorities imposed lockdown measures in Dongchang, the district where the infections occurred. The measures have since been eased.

Mr. L’s case history bears similarities to that of a man under criminal investigation by Tonghua police for suspected breaches of infectious disease prevention laws.

The probe, which was announced in late January, concerns a traveling salesman surnamed Lin who held seminars promoting health products to the elderly and was directly linked to around 80 infections.

Legal experts challenged the investigation at the time, saying it was unclear whether Lin knew he had Covid-19 and did not appear to have refused to follow disease control measures.

In a rare instance of a person being punished for violating China’s coronavirus protocols, a court last month handed a suspended prison sentence to a woman who hid her Covid-19 symptoms while traveling to Beijing from the United States in March 2020.

Tonghua was an infection hotspot during the modest rebound in China’s Covid-19 cases during December and January. Authorities responded to a succession of local outbreaks with lockdowns, mass testing and travel restrictions.

On Thursday, authorities downgraded the last two communities in the country deemed at “high risk” of coronavirus transmission, both of which were in the northeastern city of Harbin. The move indicated that the country is over the worst of the recent flare-up.

The Chinese mainland has not recorded a new locally transmitted Covid-19 case since Monday. It added (link in Chinese) 10 new infections on Friday, all of which were imported from overseas, according to the National Health Commission (NHC).

The figure brought the mainland’s total case count to 84,696, the NHC said. The death toll remained unchanged at 4,636.