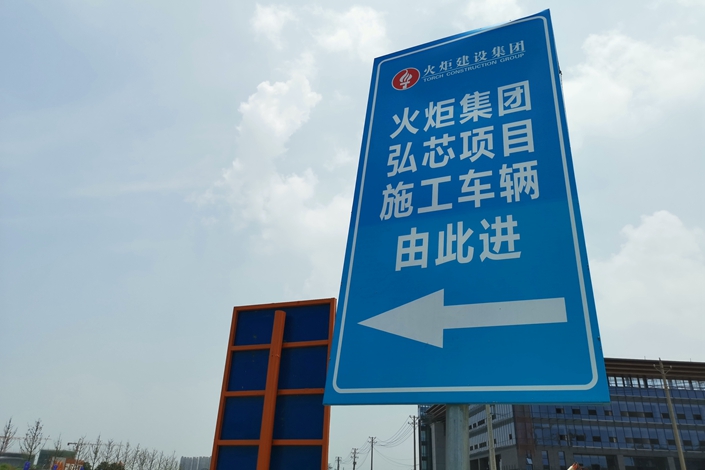 The collapse of a multibillion-dollar silicon chip-making project that was one of China’s most anticipated high-tech champions underscores the roadblocks facing the country’s ambitions of becoming a semiconductor powerhouse.

Wuhan Hongxin Semiconductor Manufacturing Co. Ltd. (HSMC), an $18.5 billion project backed by Central China’s Hubei province, started dismissing employees as hopes for a resumption of business faded after more than a year of struggles for survival.

The HSMC failure marks a major setback for China’s aspirations to become more self-sufficient in producing the high-tech chips that power most modern gadgets and devices. It also spotlights the difficulties of building such complex companies from scratch, a growing reality China faces as a U.S.-led campaign restricts its access to Western technology.

As HSMC’s troubles unfolded, Chinese authorities tightened scrutiny of careless forays into chipmaking. Many companies have “blindly taken on projects” despite having no experience, technology or workers skilled in integrated circuit development, Meng Wei, a spokesperson for the country’s top economic planner, said in October.

The project was bedeviled by legal disputes and a financial crunch for nearly two years, forcing the company to grind to a halt in late 2019. But the final implosion still surprised many employees.

“I didn’t expect HSMC to fail so quickly as there has been speculation that companies such as Xiaomi Corp. or Huawei Technologies Co. might take over,” one employee said.

HSMC sent notices to all of its workers asking them to submit resignations before Feb. 28 and complete all procedures by March 5, Caixin learned Friday. The company said “there is no plan for production resumption.”

The three-year-old project originally received strong backing from the local government and claimed to own some of the most cutting-edge chip-making equipment imported into China. It also attracted Chiang Shang-yi, a prominent semiconductor industry veteran and former vice president of Taiwan Semiconductor Manufacturing Co. (TSMC), to serve as CEO and general manager. Chiang resigned in June 2020, a year after his appointment.

Here are some facts to know about HSMC and its failure.

What is HSMC and who owns it?

Registered in November 2017 in Wuhan, central China’s Hubei province, HSMC was one of the highest-profile chip-making projects started from scratch amid Beijing’s drive for high-tech self-sufficiency.

According to public records, the company has 2 billion yuan ($309 million) of registered capital and focuses on research, development and manufacturing of semiconductor wafers. Its website shows it was planning to carve out a niche making logic chips using 14 nanometer and 7 nanometer technology and smaller, which would have made it one of China’s most advanced manufacturers in the field.

The company’s original shareholding records showed that HSMC was ultimately controlled by two individuals — Li Xueyan and Cao Shan. Little public information was available about Li and Cao, who are also little known in the semiconductor industry.

What made HSMC special?

HSMC won strong backing from the local government in its early days. The Hubei government’s official website said it was one of the province’s biggest investment projects in 2017 and 2018 and a “provincial-level key construction project” in 2018 and 2019.

HSMC attracted broad market attention for its ambitious investment plan and claims of technology advancement. The company said it would build production capacity for 30,000 14-nanometer chips and 30,000 7-nanometer chips a year.

According to a report released by the Wuhan government in July 2020, HSMC bought an advanced lithography machine produced by the Dutch company ASML Holding N.V. The government said the machine was the only device on the mainland capable of making 7-nanometer chips, which no mainland company has brought to market.

According to an HSMC asset disclosure, the ASML machinery it bought uses the deep ultraviolet lithography method in chip production. This would allow HSMC to catch up with global rivals such as TSMC, Samsung and Intel. Currently, China’s largest chipmaker, Shanghai-based Semiconductor Manufacturing International Corp. (SMIC), can produce 14-nanometer chips as its most advanced product.

But Caixin found in September that the Wuhan government’s statements about HSMC’s machinery were misleading as the company’s gear was not unique in China.

The HSMC equipment was just one of several imported machines capable of producing 7-nanometer chips, said an industry source with extensive experience in semiconductor manufacturing. For example, SMIC owns around 10 such machines, the source said.

What were the company’s problems?

HSMC was meant to be developed in two stages with 128 billion yuan of total investment, including a 52 billion yuan first stage and a second stage of 76 billion yuan.

But the first phase ran into trouble late 2019 when a local court suspended its right to use the land where it was building the plant amid a dispute with one of the engineering firms involved. The court order stopped construction.

A local government last summer brought to light a large funding shortfall facing HSMC. According to the report, the venture failed to receive 112.3 billion yuan of the originally planned 128 billion yuan. The project essentially ground to a halt amid the unlikely prospect of getting any of its remaining funding anytime soon, the report said.

Caixin learned that construction of the project was largely suspended in the second half 2019 amid increasing debt complaints from suppliers. As of November, production at HSMC had yet to start, Caixin learned.

One company executive said that most of the equipment HSMC ordered wasn’t delivered because of payment issues.

What’s next for the project?

A contractor on the project told Caixin that the government previously planned to finish the main facilities by June this year while seeking outside investors to take over the project.

“The government was hoping to revive the project,” one company executive said. The local government took over HSMC’s unfinished projects and sent people to take key management posts in the company, he said.

However, one of the project’s biggest Achilles’ heels was its inability to make it onto the national radar due to its failure to complete land acquisition, environmental impact reports and other necessary steps for the planned second phase, meaning it would be qualified for state funding. The issues will also make it difficult to attract private investors.

Yang Ge and Mo Yelin contributed to this story.