By Huang Rong and Guo Xin 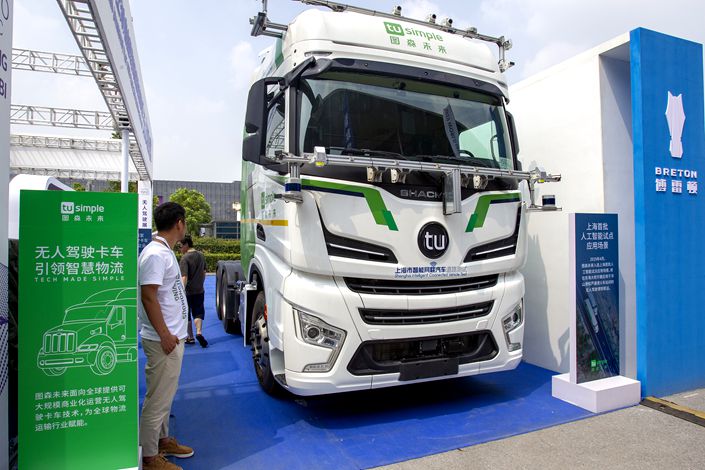 TuSimple filed Tuesday for an IPO on the Nasdaq. Photo: VCG

Chinese-backed self-driving truck startup TuSimple applied to raise cash on the Nasdaq this week, putting it on course to be the first of its peers to IPO — if a U.S. national security probe doesn’t get in the way.

The 6-year-old firm, with big backers on both sides of the Pacific, says it operates about 50 driverless freight trucks in the U.S. and 20 in China. Investors have eyed the technology as a way to overcome the long-haul limits of human truck drivers.

TuSimple did not specify a size for the IPO, but the decision to file on March 23 with the SEC shows it has shunned the blank check or “spac” listing pathway growing popular in the U.S.

The San Diego-based company has lost hundreds of millions of dollars since it was set up in September 2015 — mostly spent on research and development (R&D). Its losses widened from $45 million in 2018 to $178 million last year. R&D costs hit $132 million in 2020. TuSimple does not intend to start mass production until 2024.

Once it would have been a star lineup. But the mix of Chinese and U.S. backing has raised issues for the firm, which has been caught in the growing rift between the two nations. Sun Dream’s investment in particular has triggered a review by the U.S. Committee on Foreign Investment in the United States, which is now probing TuSimple over national security concerns.

Compared with passenger cars, trucks are regarded by some as low-hanging fruit in the push to commercialize self-driving vehicles, because they tend to operate in relatively predictable conditions such as on highways.

TuSimple began testing self-driving trucks on Arizona’s Interstate 10 in August 2018. Less than a year later, it partnered with UPS on a freight route between Phoenix and Tucson, Arizona. The firm also joined the first artificial intelligence (AI) pilot trial in Shanghai, carrying goods between Yangshan Port and Luchaogang Railway Station.

TuSimple says it operates 70 Level 4 driverless trucks, fifty of which are in the U.S., with the rest in China. According to the U.S. National Highway Traffic Safety Administration, Level 4 autonomous vehicles can drive themselves in certain circumstances, but a human driver may sometimes need to take control. Level 5 is the highest level of automation.

In July, the truck-maker reached a strategic agreement with Navistar, one of the largest commercial vehicle manufacturers in the U.S. Two months later it teamed up with Volkswagen AG’s truck heavy truck unit Traton Group.

TuSimple says it has built an autonomous freight network consisting of shippers, carriers, railways, freight brokers, and truck owners, and hopes to take a big chunk of the $4 trillion global truck freight industry.

It’s in an increasingly crowded field. Plus, a similar startup just completed a $200 million round of funding led by Guotai Junan International, CPE, and Wanxiang International Investment. It has a joint venture with FAW Jiefang, China’s oldest state-run automaker, with a plan to begin mass production this year. It has also partnered with Nvidia.

Self-driving startup Pony.ai made a foray into the trucking industry in April 2019. It created a joint venture with FW Jiefang to develop Level 4 autonomous vehicles. The company hasn’t released its production timetable.