Shanghai Exchange Condemns Tycoon Who Fled Ahead of Bond Default

By Wang Juanjuan and Luo Meihan 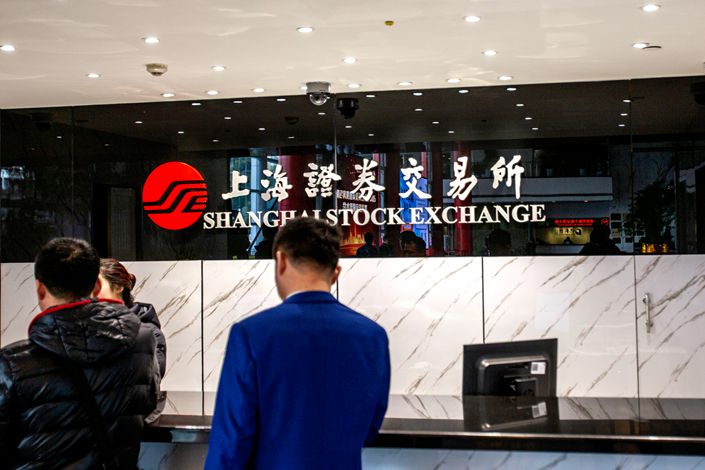 The Shanghai Stock Exchange’s public censuring of Gao Hongming and his son comes as part of broader efforts to clean up the bond market after a wave of corporate defaults. Photo: IC Photo

The Shanghai bourse has condemned a businessman who fled the Chinese mainland a few weeks before his company defaulted on a 100 million yuan ($15.2 million) bond, saying he displayed “a negative attitude toward resolving and dealing with bond credit risk.”

The Shanghai Stock Exchange’s public censuring of Gao Hongming and his son Gao Yuan comes as part of broader efforts to clean up the bond market after a wave of corporate defaults last year set off a financial earthquake.

Last week, the exchange issued a disciplinary penalty (link in Chinese) to Ningxia Yuangao Industrial Group Co. Ltd. as well as to the father and son, who are the company’s chairman and information disclosure chief, respectively. The bourse said that they had committed a series of rule violations, including counterfeiting official documents to guarantee bond issuances, failing to disclose information that may affect the company’s solvency and bond prices, and failing to manage credit risk around the bond default.

Gao Hongming and Gao Yuan left the Chinese mainland on Oct. 29 and Nov. 9, respectively, according to the bourse’s statement.

On Nov. 23, Yuangao failed to repay principal and interest of a 100 million yuan bond on the Shanghai bourse, triggering cross defaults on several other bonds it issued. The metal-products and wind-power equipment manufacturer was founded by Gao Hongming in Northwest China’s Ningxia Hui autonomous region in 2010, with 9.2 billion yuan of total assets (link in Chinese) at the end of June 2020.

Gao Hongming and his wife jointly ranked 923rd on the 2020 China Rich List released by Shanghai-based Hurun Report, with a 6.3 billion yuan fortune. They are the third richest people based in Ningxia, according to the list.

Sources close to the matter told Caixin that the company may have been unable to pay up due to losses incurred through so-called structured bond issuances, in which companies either buy part of their own bond issuances, or have an affiliated party do so, to artificially inflate demand for their bonds.

In addition, Yuangao on Nov. 12 applied to a Ningxia court for bankruptcy restructuring, but only disclosed this to bondholders on Jan. 5. The court accepted the application (link in Chinese) last month.

After the default, ratings agency Dagong Global Credit Rating Co. Ltd. slashed (link in Chinese) Yuangao’s rating from AA to C, and lowered the credit ratings of its bonds from AA or higher to CC or lower. The practice of credit ratings agencies only slashing ratings in the wake of a default has also come under greater scrutiny recently.

At the end of September, Yuangao had a total interest-bearing debt of 2.6 billion yuan, which included 1.6 billion of short-term debt, up 32.4% from the end of 2019, Dagong said in a November announcement (link in Chinese) based on financial results provided by Yuangao.

Recently, the Shanghai bourse has punished several misbehaving bond defaulters. In January, it issued a disciplinary penalty to Brilliance Auto Group Holdings Co. Ltd., parent of BMW AG’s main Chinese joint-venture partner, for violations including the transfer of assets without the permission of related parties, which raised questions whether Brilliance might have transferred valuable assets to escape debt.