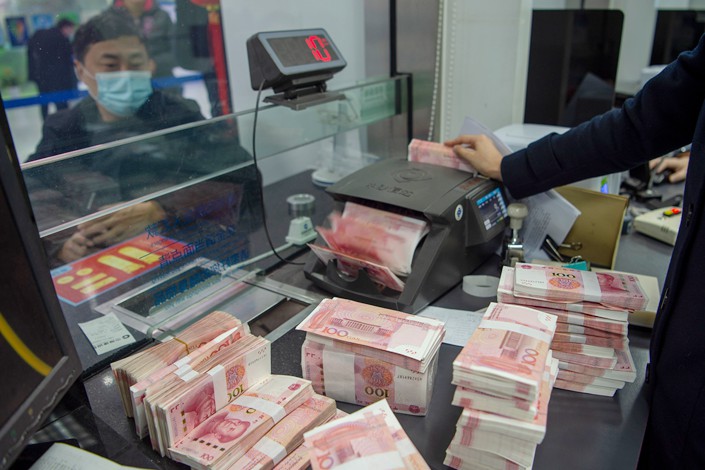 March’s credit growth slowed notably from a high base. China’s central bank started to forewarn about policy normalization as early as the second half of 2020. Market rates rose as the People’s Bank of China (PBOC) reduced its liquidity offering, and credit growth started to soften after October 2020. At the National People’s Congress (NPC) annual session in March, the government reiterated its desire to scale back policy support and focus more on controlling financial risks. Therefore, it is not surprising that March’s total social financing (TSF) credit growth (UBS adjusted, excluding equity) slowed visibly to 12.3% year-on-year from 13.3% previously. Last year’s high base played an important role as the government pushed through lending and bond issuance in March 2020 to support the pandemic stricken economy. Compared with that month, new bond issuance declined sharply and shadow credit shrank, while bank lending softened somewhat. Our credit impulse declined from 6.9% of GDP to 2.2%, while our seasonally adjusted new credit flow measure softened from 28% of GDP to 22% on a monthly basis.

Indeed, large short-term financing in March 2020 was largely in response to the impact of the pandemic, while the latest reading reflects improved corporate earnings and “normal” short-term financing. Meanwhile, new household loans rose to 1.15 trillion yuan, up 161 billion yuan from the same period a year earlier, thanks to stronger M&L household loans, which were up 150 billion yuan from a year earlier at 624 billion. The increase is likely a reflection of strong property sales and possible front-loading of banks’ lending ahead of expected policy tightening.

Much weaker shadow credit and bond issuance weighed on new TSF. New TSF came in at 3.34 trillion yuan in March, weaker than expectations and 1.8 trillion yuan less than a year earlier.

Credit growth will slow further later in 2021. The slightly slower-than-expected credit growth was mainly due to the high base from last year, as well as slow issuance of corporate and government bonds, which should pick up in the second and third quarters given that the new bond quota had been approved in the March NPC. However, looking forward, we expect monetary policy normalization to continue, with lending to the property sector (including mortgages) to be marginally tightened, corporate bond issuance and shadow credit to stay subdued in light of tighter macroprudential rules and tighter liquidity. Of course, new M&L corporate loans will likely remain strong as corporate capital expenditures related to credit demand pick up on better outlook and earnings. Meanwhile, it is unlikely that household loans will weaken too much. Overall, we expect adjusted TSF credit growth to slow to about 11% by the end of the year, from the current 12.3%. We expect credit impulse to turn negative starting in May 2021 and bottom out in October.

Credit slowdown to have limited impact on economic recovery. As the expected slowdown in credit growth to 11% at the end of the year is modest, we believe that the bulk of the decline in credit impulse will come from improvement in nominal GDP growth. Indeed, we expect China’s nominal GDP growth to rebound from 3% in 2020 to 11.8% in 2021. Relatedly, as earnings continue to improve, corporations’ need for short-term financing to survive will decline markedly. As such, with the exception that marginally tighter credit for the property sector could lead to moderation there, we see limited impact of negative credit impulse on China’s recovery. For the rest of the world, we see less of a tailwind for the global commodity market from China, as it fades the policy support, but expect limited dampening impact from a negative credit impulse. As discussed above, the credit slowdown is mild even though credit impulse drop seems sharp, and we expect only a modest slowdown in infrastructure and property investment this year, which should still record positive year-on-year growth.