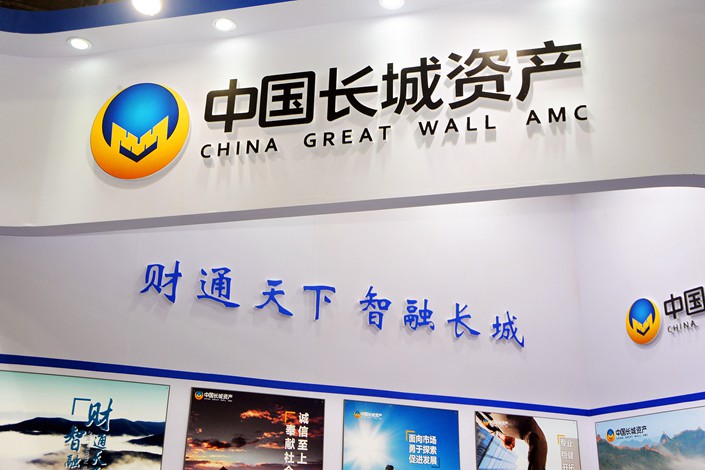 The China Banking and Insurance Regulatory Commission has been pressing the four state-owned AMCs offload their non-core businesses. Photo: VCG

China Great Wall Asset Management Co. Ltd. put its 70% stake in Great Wall Changsheng Life Insurance Co. Ltd. up for sale, according to an announcement (link in Chinese) published Wednesday on the Shanghai United Assets and Equity Exchange. The shareholding comprises a 51% stake owned by the AMC itself and 19% held by Great Wall Guofu Real Estate Co. Ltd., one of its wholly-owned subsidiaries. The sale is part of Great Wall AMC’s efforts to comply with regulatory requirements to go back to basics, sources close to the asset manager told Caixin.

Founded in 2003, Changsheng Life Insurance was acquired by Great Wall AMC in September 2009. In 2020, the insurance firm reported a net loss of 45 million yuan ($6.9 million) on revenue of 2 billion yuan. The proposed sale follows the disposal by China Cinda Asset Management Co. Ltd., another of the four national AMCs, of its 51% stake in Happy Life Insurance Co. Ltd. last year.

The China Banking and Insurance Regulatory Commission (CBIRC) and its predecessor have been pressing the four state-owned AMCs, which also include China Orient Asset Management Co. Ltd., to offload their non-core businesses amid growing concern that they were not devoting enough resources to dealing with banks’ nonperforming assets (NPAs) and had taken on too much debt by diversifying into more risky financial services including shadow banking. In January 2018, the banking watchdog issued new regulations (link in Chinese) to strengthen oversight of the big AMCs and told them to focus more on their NPA business. A report from the Communist Party’s discipline watchdog in January said the four AMCs had exited some businesses suffering from weak profitability and poor synergy with their core business and 56 subsidiaries in total had been merged or dissolved. As a result, the total assets of their nonfinancial subsidiaries had shrunk by 188.4 billion yuan, it said.

Further disposals by the AMCs are likely as they work to comply with regulatory requirements. Businesses that cannot bring synergy to their core mission of dealing with bad debts or that bring additional financial burden to their main operations, will need to be offloaded, said Chen Wen, head of the digital economy research center at the School of Finance at Southwestern University of Finance and Economics in Chengdu.

Great Wall AMC is one of four national state-owned AMCs set up by the government in 1999 to take trillions of yuan of NPAs off the books of China’s “Big Four” state-owned commercial lenders as part of a broader cleanup and restructuring of the banking sector. The AMCs were tasked with recovering as much money as possible by selling or restructuring NPAs or through other workout methods.

The AMCs were supposed to be wound down after a decade, but instead they were given a new lease of life. With low returns from the NPA business and under pressure to repay the bonds that had initially capitalized the companies, the AMCs were allowed to expand into a range of other financial services such as banking, broking, real-estate, and fund management. They also got involved in more lucrative businesses such as lending to property developers and acting as channels for unlicensed AMCs.

But this aggressive expansion, coupled with corruption and lax regulation, led to a buildup of financial risks that has now manifested itself in the crisis engulfing Huarong AMC which was set up to dispose of the NPAs of Industrial and Commercial Bank of China Ltd. (601398.SH).

Huarong transformed into an unwieldy financial conglomerate with many risky and questionable investments that ironically led to a surge in its own bad debts. Lai Xiaomin, a former chairman of Huarong, was sentenced to death in January in the country’s biggest financial corruption case to date. He was executed later that month after being convicted of taking a record 1.79 billion yuan of bribes from 2008 to 2018 in exchange for his help on a range of issues such as financing and promotions. He was also convicted of bigamy and colluding with others to embezzle 25.1 million yuan of public funds.

In March 2020, the CBIRC gave the green light for a new national state-owned AMC to handle distressed debt, the first approval since the four AMCs were set up in 1999. Beijing-based Jiantou Citic Asset Management Co. Ltd. will be turned into a financial AMC and renamed as China Galaxy Asset Management Co. Ltd. It was approved (link in Chinese) to begin operations in December.