By Flynn Murphy and Yuan Ruiyang 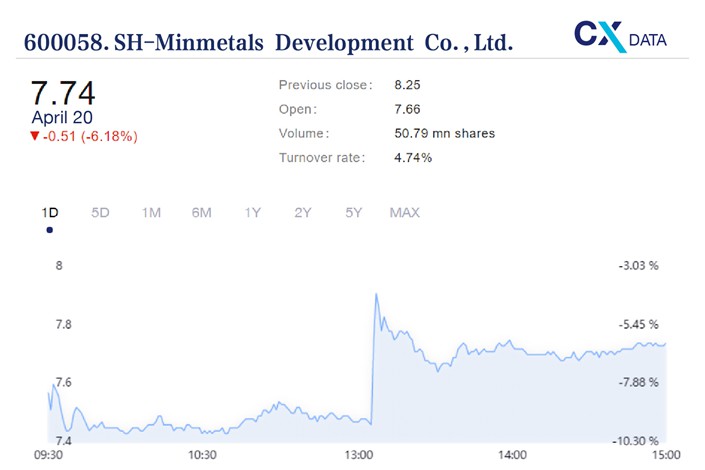 The State Administration for Market Regulation (SAMR) recently informed Minmetals that it was investigating a 2015 investment deal in which Alibaba took a 44% stake in the metals trading company’s e-commerce unit, which the regulator suspected may constitute an illegal concentration of market power under the Anti-Monopoly Law, the state-owned enterprise told the Shanghai bourse Monday.

Alibaba, which cashed out about 18 months ago, declined to comment on the announcement.

The e-commerce platform provides services including online trading, logistics and financing throughout the steel supply chain.

The tie-up also presented an opportunity for Minmetals to introduce Alibaba as a partner in its mixed ownership reform — in which private capital is brought in to reinvigorate state-owned companies — drawing in Alibaba’s technological and online marketing prowess.

Minmetals, one of the world’s largest metals and rare earth companies, made 600 billion yuan ($92.1 billion) in revenue in 2019, a 13.4% increase, according to its annual report. It’s involved in metals exploration, mining, processing and trading, and produced more than 450,000 tons of copper in 2019.

Alibaba mainly provided online technology and data analysis for the tie-up, while Minmetals provided offline resources such as warehousing.

News of the SAMR investigation comes just over a week after the same regulator issued Alibaba a record $2.8 billion fine for anticompetitive behavior centering on exclusivity deals it inked with merchants to keep them off rival platforms.

Analysts and insiders told Caixin that Alibaba appeared to have dodged a bullet with a fine representing just 4% of its 2019 domestic revenue and no requirement to forfeit gains from its illegal practices or to divest assets.

In an emergency investor call last week, Alibaba Executive Vice Chairman Joe Tsai said he did not believe the company was the subject of any other antitrust investigations, adding “we have experienced the scrutiny and we’re happy to get the matter behind us.”