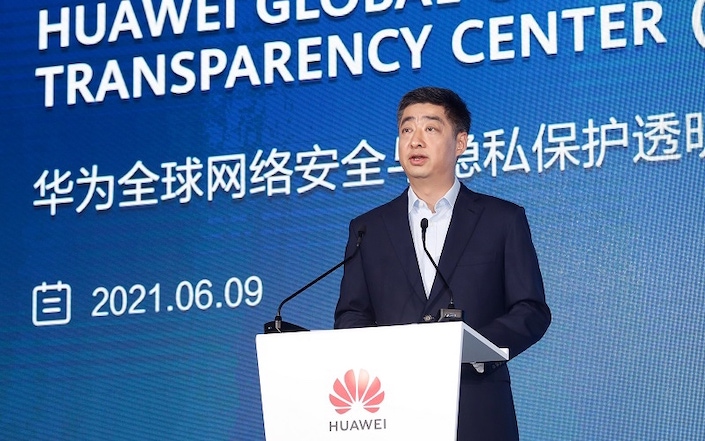 Huawei Technologies Co. Ltd. opened its largest cybersecurity and transparency center in the southern Chinese city of Dongguan as the Chinese telecom equipment giant seeks to earn greater trust in the face of sanctions by the U.S. and elsewhere over national security concerns.

The center, Huawei’s seventh “transparency center” and the first in China, aims to help cybersecurity industry stakeholders share their expertise in cyber governance and work on technical solutions, Huawei said in a statement.

The move echoes a similar response last year by TikTok, the popular social media app owned by Chinese tech company ByteDance that also faced bans in the U.S. and other countries over national security concerns.

Huawei said it will invest $1.5 million each year in the center, which will employ more than 200 engineers to test products before launch. The engineers will work independently from Huawei’s business departments. The center will be open to regulators, independent third-party testing organizations, clients, suppliers and standards bodies, the technology giant said.

“Cybersecurity is more important than ever,” Huawei rotating Chairman Ken Hu said at the facility’s opening ceremony. Cybersecurity crimes could cost the world $6 trillion in 2021, which would be the size of the world’s third-largest economy after the U.S. and China.

“As an industry, we need to work together, share best practices, and build our collective capabilities in governance, standards, technology and verification,” Hu said.

“In some places, there is still a misconception that country of origin affects the security of network equipment and technology. This is simply not true,” Hu said. Far from addressing the real challenges facing the industry, this misunderstanding will prevent the industry from developing a unified approach, he said.

The U.S. government has targeted Huawei over alleged espionage and ties to the Chinese government, asserting that the company’s 5G equipment poses security risks. Huawei has repeatedly denied the allegation. Ren Zhengfei, the billionaire founder of Huawei, said in an interview in 2019 that there is no law in China requiring a company to install a back door for the government.

“Huawei and I have not received any government requests to provide illicit information,” Ren said.

To assure foreign governments that it can be trusted for network security, Huawei launched its first regional cybersecurity review center in the U.K. in 2010, allowing the British government to review the source code of its products at Huawei’s expense.

The idea was borrowed from Microsoft’s government security program launched in 2003, which provides governments controlled access to Microsoft’s Windows source code and other technical information to be confident in the security features of the operating system, said John Suffolk, global cybersecurity and privacy officer at Huawei, who was also the United Kingdom’s chief information security officer from 2006 to 2011.

In addition to opening its source code to governments, Huawei also provides tools and training to help governments review its products, Suffolk said.

In 2018, Huawei opened a security innovation lab in Bonn, providing the German government access to its source code. It opened a cybersecurity transparency center in Brussels in 2019, allowing clients and third parties to evaluate Huawei products.

However, the effect of the transparency centers has been limited, Huawei acknowledged. The company has been banned from the U.K.’s 5G infrastructure and faces ongoing scrutiny over its security practices. Under pressure from the U.S., the U.K. government ordered the complete removal of Huawei equipment from the entire 5G network by 2027.

Suffolk described Huawei as a little rock stuck in a clash between two superpowers. The collision between governments can only be resolved by the governments, and what Huawei can do is to "cover its ears," stick to its own course, and show its work to the outside world, especially customers, through the transparency centers and other ways, he said.

Huawei has no illusions about the Biden administration and expects that the sanctions will not change in the foreseeable future, Hu said. What Huawei can do is adapt its business to reality and find ways to solve the problem with limited access to components, he said.

Huawei’s other approaches include a home-grown operating system as an alternative to Google’s Android operating system after a 2019 U.S. ban prevented the company from using many of the most important services on the system in Huawei phones.

Last week, Huawei released its HarmonyOS to open-source developers. It has set a target to incorporate the operating system into 300 million devices this year, with one-third of the goal coming from 100 million devices produced by other companies.

Huawei has also been reorganizing its business to transform from a device maker to a service provider to buffer a decline in smartphone sales. The global market share of the former No. 2 smartphone maker crumbled to 4% in the first quarter from a recent peak of 20% in the second quarter of 2020, according to shipment data from market research firm Counterpoint.