By Xu Zeyi and Yang Ge 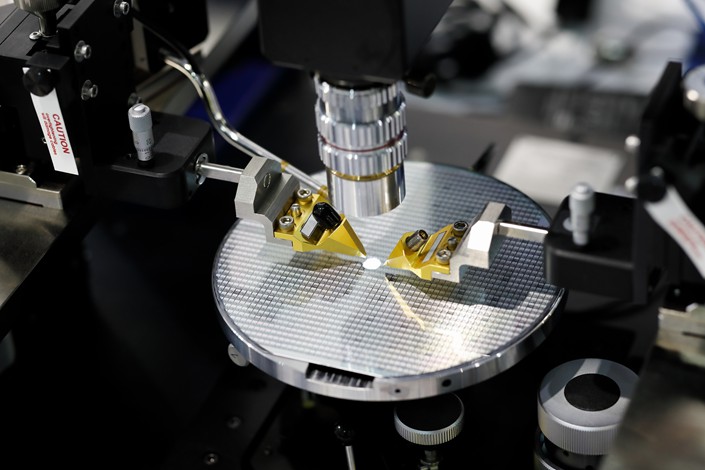 The global market for lithography equipment is relatively small due to the limited number of chipmakers, with individual machines costing tens of millions of dollars or more. Photo: IC Photo

Embattled telecoms-equipment maker Huawei Technologies has extended a recent move into the high-tech microchip sector with a new investment in high-powered lasers, as it seeks to lower its dependence on foreign technology.

In its latest move into the space, Huawei’s fully-owned Hubble Technology Investment Co. Ltd. on June 2 invested in RSLaser, whose products are used in the lithography process central to making the microchips that power most modern devices. Following the deal Hubble now holds 4.76% of RSLaser, making it the company’s seventh largest shareholder, publicly available materials show.

The investment is among 28 by Hubble to date, mostly in various parts of the semiconductor supply chain that includes chip design, manufacturing and testing.

Despite manufacturing a big portion of the world’s electronics, China must import most of the chips at the heart of such devices. Beijing has been actively working to build up its chipmaking capabilities for nearly a decade, making billions of dollars available for companies throughout the supply chain. But to date those efforts have yielded limited results.

Huawei’s HiSilicon chip design unit was one of the nation’s biggest success stories in the sector, manufacturing chips that powered its own smartphones and networking equipment that were considered among the world’s most advanced. But its ambitions suffered a huge blow last year when the U.S. pressured its key offshore manufacturing partner to stop producing HiSilicon’s advanced chips, leaving Huawei with no alternatives.

Following that setback, Huawei has been forced to step back and focus on less cutting-edge products. Analysts said its recent semiconductor investments could be focused on building up its own knowhow for chip production, potentially allowing it to fully design and manufacture chips in China someday to sidestep any future restrictions from the U.S. or other countries.

Founded in 2019, RSLaser’s products are focused on a type of lasers using deep ultraviolet (DUV) technology, which is used to make less advanced microchips. In 2018 it become China’s first company to make high energy excimer lasers, a key component for the lithography equipment used to etch the millions of circuits onto the surface of silicon microchips.

The company is now a supplier to Shanghai Micro Electronics Equipment (Group) Co. Ltd., which controls 80% of the market for domestically manufactured lithography equipment in China.

Despite RSLaser’s accomplishment, lithography equipment using its DUV technology is still behind the world’s most cutting-edge equipment used to make the advanced chips that HiSilicon was making. That market is still squarely controlled by Dutch firm ASML, along with Japan’s Canon and Nikon, which use a more advanced process based on extreme ultraviolet technology.

The global market for lithography equipment is relatively small due to the limited number of chipmakers, with individual machines costing tens of millions of dollars or more. Worldwide lithography machine sales totaled a modest 413 last year, with an estimated value of about $13 billion, according to BOCI International.