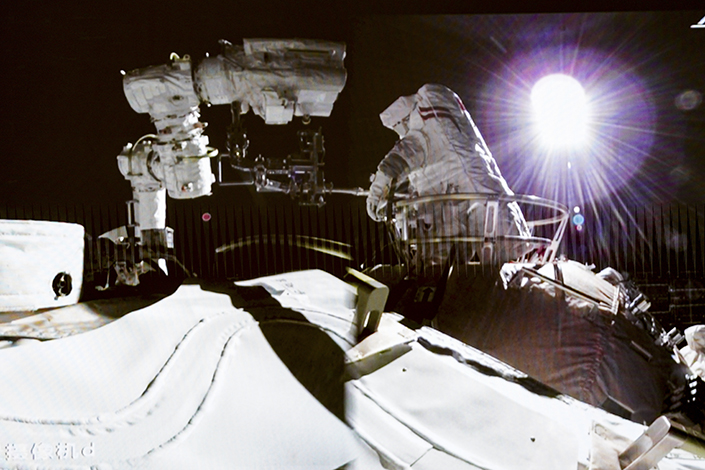 “Wow, it’s so beautiful out here!” Chinese astronaut Liu Boming gasped as he slipped out of the Tianhe core module of China’s space station to begin a spacewalk at 8:11 a.m. on Sunday.

Liu was conducting the mission’s first extravehicular activity to install equipment such as foot restraints and workbench on a robotic arm. He is one of three astronauts aboard the Shenzhou-12 spacecraft, which was launched on June 17 to visit the Tiangong space station. They will remain in orbit for three months to carry out repairs and other tasks.

About three hours later, fellow astronaut Tang Hongbo pulled himself out of Tianhe to assist Liu in finishing the equipment installation. They also worked together to lift a panoramic camera outside the core module before completing their spacewalk at 2:57 p.m.

The successful spacewalk was the second in Chinese history after Zhai Zhigang performed a nearly 20-minute spacewalk in 2008 during the Shenzhou-7 mission. The Tianhe core module was launched into space in April, marking the start of the Tiangong space station deployment slated to be completed within two years.

According to the China Manned Space Engineering Office (CMSEO), the latest spacewalk lays a foundation for smooth implementation of future extravehicular activities on the space station. The country plans to carry out 11 missions to help with the construction of Tiangong, including four manned launches, Caixin has previously reported.

On June 17, China successfully sent the three astronauts into space to board the Tianhe core module. Yang Liwei, director of the CMSEO and the first Chinese astronaut sent into space, told the state-run broadcaster CCTV that he was “so envious of them” as their new home is so much more capacious than the 2.8 meter-wide Shenzhou-5 he crammed into in 2003.

The total space available in the core module, including the manned and cargo spaceships, is now nearly 150 cubic meters, 10 times larger than the past, Bai said, calling the current accommodations a “villa” by comparison.

Each astronaut has their own bedroom, though the team shares a single bathroom, amenities which are designed to help maintain their physical and mental well-being while in conditions of extended weightlessness and confined space, said Huang Weifen, chief designer of astronaut systems for the space program.

The three-month stay is likely to test the endurance of the astronauts as they seek to avoid illness and respond to potential emergency incidents. To keep tabs on the well-being of the crew, Tianhe has been equipped with an acoustic and optical alarm system to act as an early warning system on the ground for monitoring, Huang said.

By doing this, its not necessary for the astronauts to stay awake and be on guard at all ties, she said. In addition, the core module has special heating equipment, dedicated areas with suitable lighting for ensuring they sleep well, and a pantry stocked with more than 120 types of space food.

To keep their muscles from atrophying, astronauts must undertake at least two hours of exercises, three to four times a week, on treadmills and stationary bicycles designed to address issues of long-term weightlessness.

“Astronauts (can) adjust their mood and have fun, while watching movies, listening to their favorite music as well as reading books,” Huang said. “We’ve also developed a virtual reality-based system via which astronauts can see their families, familiar life scenes and beautiful landscapes.”

Yang said the mission was doing everything possible to allow the space crew to enjoy a comfortable life in orbit.

Among the new technologies is a regenerative life-support system in which Chinese astronauts’ urine and body moisture can be recycled into distilled water they can safely drink and use during sanitary work, said Pang Zhihao, a researcher from the China Academy of Space Technology. The system also produces oxygen by water electrolysis, he said.

As astronauts need to stay in space for longer periods, there is a tradeoff involved with the resources they need to sustain themselves. By recycling as much as possible, this reduces the need for more powerful launch vehicles as well as saving money, Pang said.