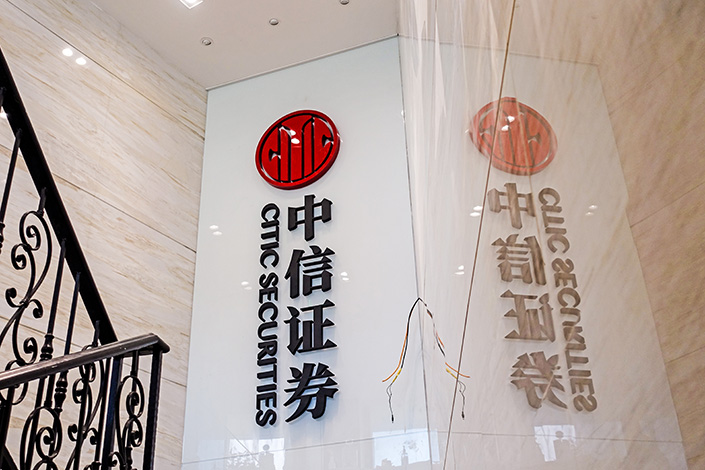 Citic Securities Co. Ltd. (600030.SH), one of China’s biggest brokerages, is planning to take part in a new pension joint venture, embracing the nation’s call to tackle a looming pension crisis fueled by questions surrounding the sustainability of the current pension system as the population rapidly ages.

Citic Securities Investment Ltd. and Citic Wealth Management Corp Ltd., two connected companies of the brokerage, on Friday signed an agreement with 15 other promoters to establish an insurance business joint venture that will offer commercial pension plan management, according to a company filing released by Citic Securities.

The resulting pension insurance company is likely to be launched in the fourth quarter of this year as part of the country’s third-pillar pension system, sources familiar with the matter told Caixin.

The registered capital of the venture is expected to be 11.15 billion yuan ($1.72 billion), of which Citic Wealth Management will contribute 500 million yuan and Citic Securities Investment will put in another 300 million yuan, representing a combined stake of around 7%, according to the filing.

Other investors, independent of Citic Securities and its connected companies, will form the rest of the capital base. No specifics on these participants or details of their stakes were released in the filing.

The establishment of the joint venture, pending approval by China’s top insurance regulator, dovetails with China’s vow to bolster the three-pillar national pension system by promoting the private pension sector over the next five years (link in Chinese).

The Insurance Association of China estimated (link in Chinese) last year that the country could suffer an 8 trillion yuan to 10 trillion yuan pension shortfall over the next five to 10 years.

China currently operates a three-pillar pension system which is dominated by the state-run “first pillar,” which consists of basic pension insurance funds generally managed by provincial-level governments. The first-pillar funds account for 82.9% of total pension funds by asset value in China.

Meanwhile, funds from employers put into enterprise annuities and occupational annuities — the “second pillar” — made up 17.1%, according to an article (link in Chinese) published in May by a researcher from the finance institute of the Chinese Academy of Social Sciences, a state-backed think tank, and his research fellow at the University of Chinese Academy of Social Sciences.

So far, third-pillar funds are negligible, but recent momentum behind China’s push into private pensions suggests the sector has growth potential. In June, the country launched a new pilot program for private pension funds that allows workers to open their own individual pension accounts at one of six participating insurance companies.

Experts and analysts urge (link in Chinese) the government to build up related infrastructure such as clear definitions of qualified third-pillar products, and to offer more incentives (link in Chinese) such as preferential tax treatment to support the sector.

The results of China’s latest once-a-decade census, published in May, highlighted an acceleration in the country’s aging population, the shrinkage of working-age demographics, and a birth rate which was far lower than expected.