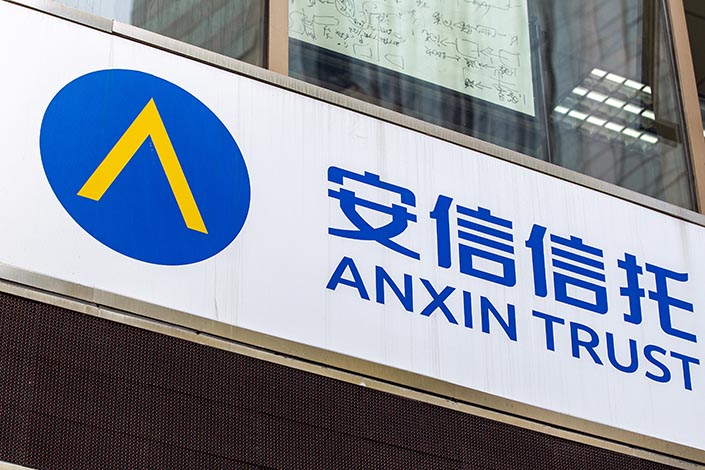 The headquarter of Anxin Trust in Shanghai on March 17, 2020. Photo:VCG

China’s Anxin Trust Co. Ltd. (600816.SH), which is being bailed out by the state after failing to repay billions of yuan to creditors and investors, has unveiled details of a restructuring plan announced last week aimed at restoring its finances and preventing its debt crisis from damaging financial stability.

The company will raise up to 9 billion yuan ($1.39 billion) by selling shares to Shanghai Di’an Investment Management Co. Ltd., a special purpose vehicle set up last week by local state-owned companies and the operator of a state-backed bailout fund for trust companies. On completion of the deal, Shanghai Di’an will hold a controlling stake of 44.44% in the company, it said in a filing (link in Chinese) to the Shanghai Stock Exchange Friday.

The cash injection marks another step forward in the government’s efforts to defuse a crisis at the listed company following an uncontrolled, debt-fueled expansion and the alleged misappropriation of an estimated 100 billion yuan by its actual controller Gao Tianguo who was detained last year amid a probe into illegal lending. The company’s financial performance has deteriorated significantly — it posted a net loss of 6.7 billion yuan in 2020, the company said in May, after reporting a loss of nearly 4 billion yuan in 2019 and 1.8 billion yuan in 2018.

Anxin Trust is one of several trust companies embroiled in financial problems after years of rapid debt-fueled growth, embezzlement of funds, and lax regulation. Many sold risky products to investors which they have subsequently failed to redeem, leaving them owing hundreds of billions of yuan to their customers and creditors. The China Banking and Insurance Regulatory Commission has targeted trust companies as part of a broader campaign to defuse risks, especially stemming from shadow banking, that could spread through the financial system and cause instability.

Anxin Trust is planning to sell the shares to Shanghai Di’an in a private placement at 2.06 yuan per share, a discount to the 2.53 yuan closing price on July 16, the day before trading was suspended pending the announcement.

“The private placement will have a positive impact on Anxin Trust’s financials,” the company said. “Total assets, net assets and capital will increase substantially and the liabilities-to-assets ratio will decline, which will help the company better withstand risks, resume normal business operations … and improve profitability.”

In a separate filing (link in Chinese) Friday, Anxin Trust said it had reached debt settlement agreements with CTPF, the bailout fund, and the Shanghai branch of Bank of China Ltd. (BoC).

Anxin Trust owes CTPF and the bailout fund itself a total of 5.7 billion yuan after defaulting on loans they provided since 2019 to help it overcome a liquidity crunch. In lieu of the debt, the bailout fund has now agreed to a deal that will see it receive 1.46 billion shares in Anxin Trust and 800 million yuan in cash, while CTPF will get a 32.98% stake in Datong Insurance Sales and Services Co. Ltd.

The filing showed that Anxin Trust took out loans totaling 3.3 billion yuan with BoC’s Shanghai branch, some of which it has defaulted on. Under the settlement agreement, the loans will be repaid from the trust firm’s assets including a 3.4% stake in China Citic Bank International Ltd., proceeds of multiple asset management plans it holds, and 800 million yuan in cash.

China has 68 licensed trust companies, including two publicly traded firms — Anxin Trust and Shenzhen-listed Shaanxi International Trust Co. Ltd. (000563.SZ). The trust industry has played an important role in shadow banking by providing loans to higher-risk companies and those with difficulty obtaining credit from banks. But the authorities have become increasingly concerned about the potential risks lurking in the sector following a series of scandals and defaults involving billions of yuan.

Anxin Trust is currently 52.44% owned by Shanghai Gorgeous Investment Development Co. Ltd., which is controlled by Gao Tianguo. It was found to have misappropriated proceeds from trust products and created huge payment risks by guaranteeing returns to some investors, Caixin has previously reported. The firm became a platform for Gao to raise funds for his own businesses, including property, by misappropriating nearly 100 billion yuan from the sale of trust products, several industry insiders told Caixin.

Anxin Trust’s crisis started in April 2019 when it failed to repay 2.8 billion yuan to trust plan investors, setting off a cascade of defaults. As of the end of June 2020, the company had nearly 200 billion yuan of assets under management, and had missed repayments on products totaling around 80 billion yuan, sources familiar with the matter told Caixin.

Anxin Trust’s shares fell from a peak of 12.43 yuan in November 2017 to a low of 1.2 yuan in December 2020. But they have recovered this year as speculation has grown that the company will be bailed out. In May, the Shanghai bourse withdrew (link in Chinese) its warning of delisting risk it had previously imposed on Anxin Trust’s stock, although it also warned of “other risks.” The shares rose 5.14% on Monday and a further 4.89% on Tuesday, closing at 2.79 yuan.