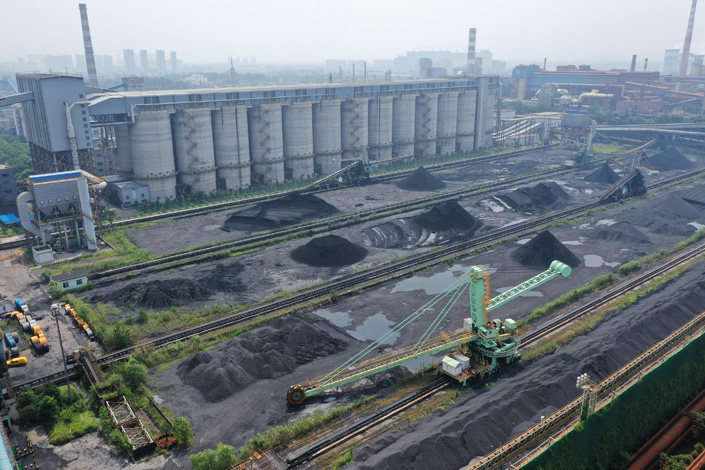 A coal mine in Nanjing, East China’s Jiangsu province, on Aug. 19. Photo: VCG

China’s top coal producers said they would maintain adequate shipments to power stations as demand outstrips supply to ensure the nation’s grid can operate uninterrupted ahead of the peak winter season and bring down surging prices, in part by selling directly to the end users.

“Shandong Energy Group will continue working to ensure the supply of electricity and coal during the peak winter period,” according to the statement. “Under long-term contracted price mechanisms, we stop shipping via market players and instead send them directly to end users to prevent middlemen from maliciously manipulating coal prices.”

None of the three companies explicitly stated how they would ensure supply of thermal coal, which is used for electricity generation.

China is struggling with a shortage of thermal coal leading to power rationing in some regions earlier this year as imports tightened after Beijing informally banned Australian coal last year and amid strong competition from other Asian and European nations for seaborne cargoes ahead of the peak winter season.

Last winter some cities across China including in Zhejiang and Hunan provinces experienced power outage as colder-than-usual weather and rebounding economic activity combined with tight coal supplies strained the grid.

Despite pledging to become carbon neutral by 2060, China is the only major economy where coal demand increased in 2020 and is expected to increase by more than 4% in 2021, according to the International Energy Agency.

Back in mid-August, the coal stocks at power plants in several provinces and cities such as Guangdong, Shanghai, Zhejiang, and Jiangsu can only maintain electricity generation for between nine days and 14 days, despite the minimum requirement being 15 days, according to Caixin Data reporting (link in Chinese). The threshold was eased for peak season to mandating between seven days and 12 days of supply on Tuesday (link in Chinese).

At Qinhuangdao Port, the main facility for storing imported coal reached its lowest level in six years on July 21, Caixin Data shows. Only 346 million tons were held at the port on that day, shrinking from more than 500 million tons at the beginning of the year.

To stabilize prices, Shandong Energy and China National Coal said in their pledges that they would lower their thermal coal prices by 10 yuan ($1.50) per metric ton.

Beijing has set ambitious goals for reaching peak carbon emissions by 2030 and achieving carbon neutrality by 2060. To achieve the goal, slashing down coal capacity seems to be an essential step.

In January, Chongqing also shut down 14 coal mines of Chongqing Energy Investment Group Co. Ltd. to phase out 11.5 million tons of annual coal mining capacity, which accounted for around 85% of the company’s total capacity.

Su Xueni contributed to this story.