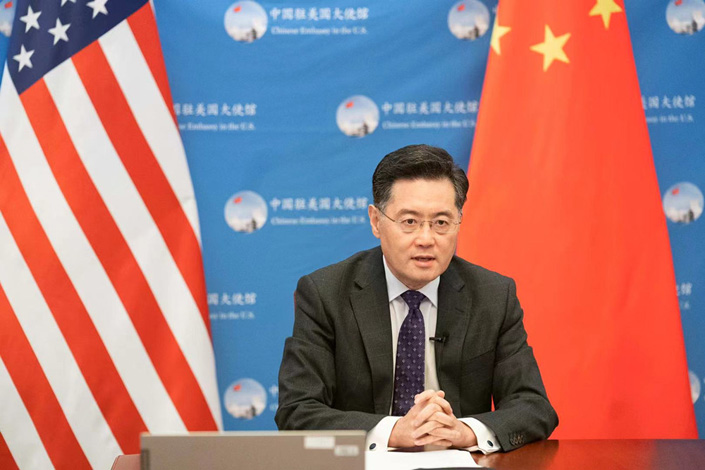 China’s ambassador to the US Qin Gang speaks during an online discussion jointly held by the Carter Center and the George H.W. Bush Foundation for U.S.-China Relations on Wednesday. Photo: china-embassy.org

China’s new ambassador to the U.S. Qin Gang said the two countries must base their efforts to deescalate bilateral tensions on mutual respect for each other’s interests, according a statement issued by the Chinese embassy.

China has “great sincerity in starting up a dialogue with the United States to deescalate the tensions” and will continue to work with the U.S. “as long as there are opportunities for cooperation,” Qin said during an online event held by The Carter Center and The George H.W. Bush Foundation for U.S.-China Relations.

“The United States should not expect China’s cooperation in areas where only the U.S. has demand and interests, while neglecting or even undermining China’s interests at the same time, in particular on these core issues concerning China’s sovereignty and territorial integrity,” he said.

In late July, China laid out detailed ground rules for engaging with the Biden administration on bilateral issues, grouping them under the “three bottom lines” and “two lists” of demands, with the first referring to lines Beijing said the U.S. should never cross.

Tensions remain high between the two countries despite President Xi Jinping’s phone conversation earlier this month with his counterpart Joe Biden, during which they expressed their hopes to promote cooperation, manage competition and prevent “unintended conflict.”

Qin arrived in the United States in late July to replace Cui Tiankai, longest serving ambassador of the People’s Republic to the U.S., who returned to China in June. In his remarks upon arrival, Qin vowed to “endeavor to bring China-U.S. relations back on track.”

Although Qin acknowledged that Xi’s conversation with Biden sent “positive signals,” the diplomat said Wednesday that he was worried that “the U.S. uses competition to define China-U.S. relations, while competition on the U.S. side often takes the form of confrontation, especially on major issues concerning China’s core interests” and that this “will undermine China’s efforts to promote our mutual trust and cooperation” if the U.S. persists.

In recent months, China and the U.S. have been discussing climate change, an

area they see as an opportunity for reengagement after four years of turbulent ties under the Trump administration. Although Beijing hoped to leverage the talks to address bilateral tensions, Washington insists on keeping politics out of discussions.

He said China has “whole-process democracy,” saying “China's Constitution prescribes that all power belongs to the people.”