By Zhao Xuan and Han Wei 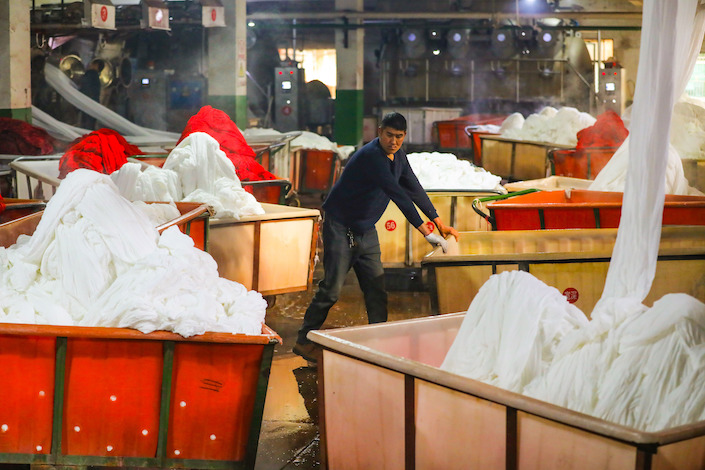 About 160 energy-intensive companies have been affected, mainly in the textile, dyeing and chemical fiber industries.

About 160 energy-intensive companies have been affected, mainly in the textile, dyeing and chemical fiber industries. “It is mainly for the provincial government’s energy consumption control requirements,” said a community official at Ma’an area in Shaoxing city, in northeastern Zhejiang province.

Nearly 80% of the affected companies are in Ma’an, where a production halt order was issued for Sept. 21–30, according to the official.

The central government is pressing local authorities to reduce energy consumption as part of a national green transition strategy to lower emissions of climate-changing greenhouse gases. Beijing aims by 2025 to reduce national energy consumption per unit of GDP by 13.5% from 2020 while cutting carbon emissions 18%. Local governments have been given specific reduction goals.

In a document issued by the National Development and Reform Commission in August, Zhejiang was among several provinces receiving a “second-level warning,” meaning they face severe challenges to meet the energy targets.

The Keqiao district in Shaoxing, which oversees Ma’an, is China’s most important textile industry base, accounting for 30% of national capacity. Local authorities have ordered companies to reduce power usage and cut production.

“The suspension is quite long, and it will definitely affect business as order deliveries will be delayed,” the executive said.

The provincial government in Zhejiang released a five-year plan in May requiring high energy-consuming industries including textiles, dyeing and plastics to upgrade their technology and improve business efficiency. City authorities across the province have stepped up efforts to control energy consumption.

In addition to textiles, several steel companies in Zhejiang have been ordered to reduce output over the past week, steel industry portal Mysteel.com showed.