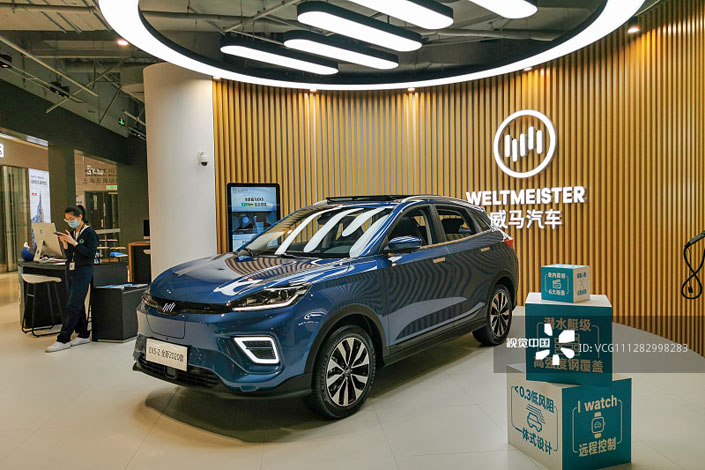 A WM EX5-Z series electric vehicle sits on display at a shopping mall in Shanghai in May 2020. Photo: VCG

Despite a string of setbacks and increasing competition, the Baidu- and Tencent-backed electric-vehicle maker WM Motor Holdings Ltd. has raised more than $300 million in new funding in a sign of continuing investor interest in the firm.

The loss-making WM Motor has been hampered by setbacks, including a stalled STAR Market listing and a vehicle recall over battery-related fire hazards.

"We are extremely honored to have been invested in by such renowned global investors, especially during this period of industry consolidation and rapid growth coupled with intensified competition," said WM Motor founder and CEO, Freeman H. Shen, in a statement released Tuesday.

The funding will be used for development of autonomous driving and other smart technologies, the statement said.

The EV startup is seeking yet more cash and said it expects to get an additional $200 million from as yet unnamed “prestigious international investors” in a D2 round.

Despite the continuing fundraising, the EV producer is yet to turn a profit. In the first nine months of 2020, it reported a net loss of over 3.6 billion yuan ($565 million), more than double the loss it reported in 2017, according to its exchange filing.

The firm started the listing process for Shanghai’s STAR Market in September 2020 and completed the pre-listing work in January this year, but in April reportedly postponed the IPO.

A spokesman for WM Motor told Caixin that the plan to list domestically was unchanged and declined to comment on reports that the firm was mulling a listing on overseas capital markets.

Just a month after it started the IPO filing process, WM Motor recalled 1,282 vehicles (link in Chinese) due to potential fire hazards caused by battery problems after three of its Weltmeister marque EVs caught fire in Beijing and Fujian province within the space of a single month.

Competition is set to intensify for the EV startup in the future as more tech giants rush to grab a share of the market.

Xiaomi Corp. set up its EV arm on Sept.1 with a registered capital of 10 billion yuan and Lei Jun as its legal representative. Baidu completed a wind tunnel test for its electric car prototype in August. Huawei Technologies Co. Ltd. signed a deal in late July with an EV subsidiary of Guangzhou Automobile Group Co. Ltd. to develop luxury autonomous vehicles.

But the market is also ballooning. In August, new-energy vehicle sales in China hit a new monthly record, with over 320,000 units sold. This was 17.8% of overall vehicle sales, a market share very close to the government’s target of 20% by 2025.