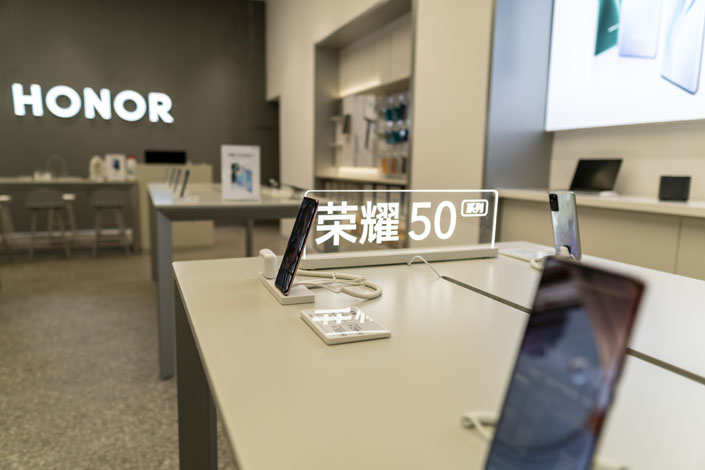 Honor Device Co. Ltd., the smartphone brand Huawei sold last year, said the global version of its new flagship series will come preinstalled with Google apps, as it boosts its overseas presence unburdened by the U.S. sanctions weighing down its former parent.

The Shenzhen-based firm announced on Twitter Monday that it has “succeeded in confirming cooperation with a number of supplier partners in the early stage,” and that its Honor 50 series will be equipped with Google Mobile Services (GMS), meaning that users will have access to popular apps like Google Play, Google Maps, Chrome, YouTube and Gmail.

Honor, which unveiled the Honor 50 and its premium and budget variants in China in mid-June, is expected to launch at least one international version in Europe on Oct. 26. The series was an instant success in the mid-priced segment in the domestic market, according to Counterpoint Research.

Last November, Huawei sold Honor to a Chinese government-backed consortium, a move that sought to help the brand avoid U.S. export controls that require companies using American technology — including Google — to obtain U.S. government approval before selling products to Huawei. The Chinese telecoms giant was placed on the “entity list” in May 2019, and has seen its share of the domestic smartphone market dwindle as it suffers from a shortage of components.

Since being spun-off, Honor has been working to build its presence in the domestic market. In January, the company announced that it had forged partnerships with major suppliers including Qualcomm, AMD, Intel, Samsung, Microsoft, Micron Technology and MediaTek.

As a solution to the sanctions, Huawei developed its own operating system (OS), Harmony, built on top of the Linux open source OS. Unveiled in August 2019, it is designed to be used in sophisticated devices like cars or smartphones, but also on much simpler devices like appliances that don’t have nearly as much memory. The new versions of its flagship Mate 40 Series and Mate X2 foldable smartphones were launched with the new OS in early June.

At the launch of the Honor 50 series in June, CEO Zhao Ming said the company’s devices will remain Android-based but that the company will closely follow Harmony’s developments. He said the choice of OS will depend on the preferences of global users.

In August, the former budget brand launched its first upscale product, the Magic 3. The smartphone, priced between 4,599 yuan and 7,999 yuan ($713-$1,241), would ship preinstalled with GMS, an Honor representative previously told Caixin.

At the launch, Zhao compared the device’s features with Apple’s then-latest iPhone 12, and explicitly said the key to competing in the high-end market is to be on par with Apple’s products.

Zhao added that in the past, Apple and Huawei held the top two positions in China’s high-end mobile phone market. Following Huawei’s supply problems, Apple was able to boost its market share, meaning that, moving forward, Honor must prioritize catching up with the American giant.

Responding to user reviews that pointed out similarities between the Magic 3 and Huawei’s Mate series, Zhao said that the two had “nothing to do with each other.”

However, he noted that it is normal to see some Huawei-like attributes in Honor’s devices — at least for now.

“Since the two brands are derived from the same technology and platform, it is normal to see Huawei’s shadow in Honor. However, we will see a completely different Honor in the future,” he told Chinese media following the launch.

Also in June, Honor surpassed Xiaomi to become China’s third-largest smartphone brand, having gained a 15% market share, according to Counterpoint Research. The first and second spot went to Vivo and Oppo, which controlled 23% and 21% of the market respectively. Huawei fell to 15% in the first quarter of 2021, from its peak of 33% in the second quarter of 2020, according to a separate report from Counterpoint Research.

However, the report noted Honor’s growth outside China might be more gradual, due to low loyalty in the mid-segment overseas and the time needed for the company to build its distribution network.

Despite being separated from Huawei, Honor could still risk being placed on a U.S. economic blacklist. In August, a group of 14 Republican lawmakers in the U.S. House of Representatives urged the Commerce Department to put Honor alongside Huawei on its “entity list,” Reuters reported.