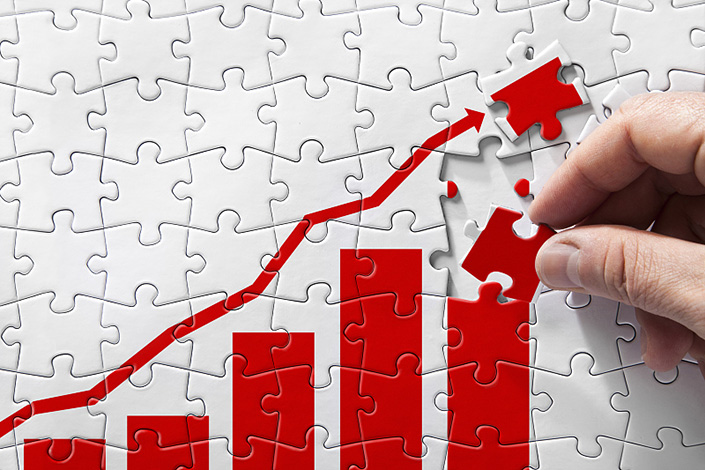 China’s junk bond market has developed in a way that has made it difficult to correctly value the bonds, a problem that regluators are now trying to address. Photo: VCG

Some investors in junk bonds, often referred to by the rose-tinted industry term “high-yield bonds,” have been earning a 20% annualized return, with some hoping to make 40%, an investment banker with a midsize brokerage said. “High-yield bonds have been in a bull market in the past two years.”

In China, most insurers and mutual fund managers shy away from junk bonds as they are not allowed to invest in non-investment grade bonds. Meanwhile, securities firms and private fund managers willing to take more risks for higher yields can hardly form any reasonable investment strategies for junk bonds.

The core problem is that China’s junk bond market has developed in a way that has made it difficult to correctly value the bonds, due to inflated ratings, implicit government guarantees and an ongoing cat-and-mouse game between regulators and companies that employ a price-distorting method of issuing bonds.

These problems have caught the attention of regulators. In August, six state departments including the People’s Bank of China (PBOC) called for efforts to develop the high-yield bond industry (link in Chinese) in a regulated way.

The question of size

Internationally, junk bonds refer to those with credit ratings lower than investment grade — BB+ or lower by S&P Global Ratings Inc. and Fitch Ratings Inc., or Ba1 or lower by Moody’s Investors Service Inc. Also called speculative-grade bonds, these bonds are deemed more likely to default, but could offer investors greater reward for the risk by paying a higher yield.

There’s no accurate estimate of the size of China’s junk bonds market, which took shape spontaneously when more and more companies defaulted. Part of the problem is that domestic regulators don’t have a definition for junk bonds, though market insiders generally identify them by the level of their yield. One ratings agency, Shanghai Far East Credit Rating Co. Ltd., uses 8% as the threshold, and estimated that outstanding junk bonds in China reached 960 billion yuan ($149 billion) at the end of June. That compares with about $2 trillion in the U.S., according to Liu Lu, an analyst with Ping An Securities Co. Ltd.

“Different institutions have different standards for what counts as a high-yield bond, resulting in different estimations of the market size. Also, there’s no reliable data about the actual yields,” said a fixed-income investment professional.

Yields on junk bonds in China tend to be higher than in many other countries. At the end of July, Chinese issuers’ U.S. dollar-denominated high-yield bonds had an average yield of 12.8%, compared with 8.9% for junk bonds in Asia, according to data compiled by UBS Asset Management (Hong Kong) Ltd.

High Chinese junk bond yields have been driven in part by a series of bond defaults by real estate developers and a slew of debt crises among local government financing vehicles (LGFVs). A FTSE Russell index measuring the performance of dollar-denominated Chinese high-yield bonds put their average yield to maturity at 12.69% at the end of September. And for junk bonds issued by real estate developers, which made up 63% of all outstanding Chinese junk bonds’ market value, the figure was 16.77%.

China’s primary junk bond market is essentially made up of “structured issuances” (结构化发行), a creative way that some Chinese companies have employed to raise funds that they couldn’t otherwise obtain due to their high credit risks.

With structured issuances, an issuer with a less-than-stellar credit rating buys a portion of its own bond offering, or has another entity make the purchase, to inflate the issuance size. That can create a better image for its issuance by showing there’s a sizable enough interest in the market. That better image, in turn, helps attract real buyers willing to accept a lower yield for its bonds. Lower-rated LGFVs, privately owned companies and even some state-owned enterprises have made use of this shady practice.

The tactic started getting popular in 2018 as China was rattled by default fears. Late that year, Zhou Hao, president of China Chengxin International Credit Rating Co. Ltd., said in a speech that private companies’ actual fundraising value was far lower than their bond issuance because a large portion of the bonds were bought by the issuers themselves, Caixin previously reported.

High-yield bonds generated by structured issuances mask the credit risks of the issuers, creating problems for investors and regulators alike.

Many analysts and industry insiders see structured issuances as a threat to the stability of the bond market. In November, a self-regulatory organization for the interbank market — one of the two primary markets for bonds in China — banned companies from subscribing to issuances of their own bonds or buying them indirectly through related parties. In 2019, the Shanghai and Shenzhen stock exchanges issued similar bans.

There are no official statistics about the scale of junk bonds being generated by structured issuances in China. In a June 2019 report (link in Chinese), Citic Securities Co. Ltd. analysts estimated there was 1.5 trillion yuan in outstanding bonds with structured issuances, accounting for about 8% of China’s total corporate bond market.

China’s bond market is fragmented. Supervised by multiple regulators, it suffers from an underdeveloped legal oversight system and insufficient mechanisms for protecting investors and punishing misconduct, according to an analysis by China Chengxin.

All this is true for the country’s junk bond market as well, though this segment faces more profound problems. In China, junk bonds are concentrated in two areas already teeming with debt risk: real estate developers and LGFVs.

The property market has accumulated huge debts over the years, with its problems manifesting in the financial teetering of behemoths such as China Evergrande Group.

LGFV debts have also become a popular option for junk bond opportunists in the past few years because of implicit government guarantee. However, to be able to invest in LGFV bonds, connections with local governments are sometimes a necessity, especially in some counties and districts in Southwest China cities whose credit risks are relatively high.

“You need to live in that county and befriend local officials before you can invest,” an experienced junk bond investor said. The investment banker with a midsize brokerage said it’s impossible to get in touch with bond issuers there without intermediaries who charge fees from both issuers and investors.

Another problem that makes it difficult to get one’s head around junk bonds in China is the suspiciously high credit ratings in the market. Of the 3,539 issuers of three types of outstanding corporate bonds in China as of the end of June, the share of issuers with AA or higher ratings was 98.5%, 94.1% and 87.8%, respectively, an industry report (link in Chinese) shows. In a world where junk bonds are usually determined by credit ratings, the situation in China makes it hard for investors to tell which bonds are more at risk for default.

Industry insiders have called for rules to better protect investors, which could help solve the problem of selling high-risk bonds to individual investors who can’t identify and aren’t willing to take on the risks of holding junk bonds.