By Huang Rong and Wang Xintong 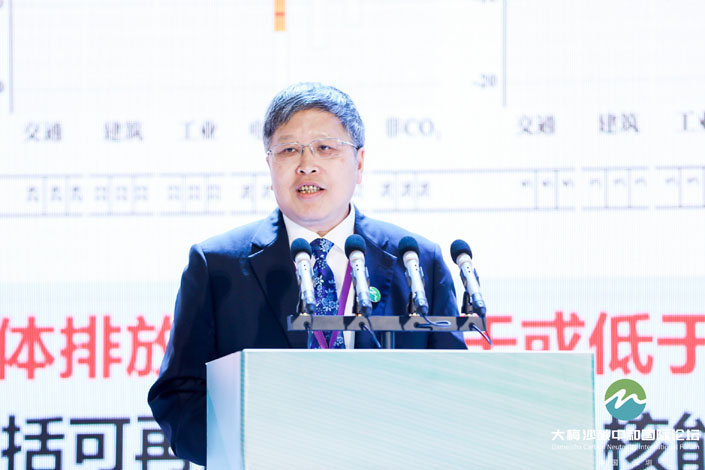 China should set tailored targets for different industries based on the difficulty they will have in meeting the 2030 peak carbon goal, leading government environmental researcher Wang Jinnan said, noting the aim of avoiding concentrated pressure on emissions reductions in the period from 2026 to 2030.

Wang, president of the Ministry of Ecology and Environment’s Environmental Planning Institute, made the comment at a Caixin co-sponsored international forum on carbon neutrality, which was held Sunday in the southern metropolis of Shenzhen.

Taking the power industry as an example, Wang, a member of the prestigious Chinese Academy of Engineering, said that due to the need for supply security, it’s hard for the sector to reduce carbon emissions, suggesting that it can achieve the goal later than other industries.

He said authorities could work to help industrial sectors such as steel and cement reach peak emissions several years ahead of the 2030 deadline, as early as 2021.

China has pledged to peak carbon dioxide emissions before 2030 and become carbon neutral by 2060. To keep its promise, the world’s largest emitter of greenhouse gases has been making efforts such as launching a national carbon trading market and boosting green finance.

Emission reductions in core industries and fields are important for China to achieve its peak goal. Wang said that in 2020, the country’s carbon dioxide emissions from energy consumption were about 10 billion tons. Among them, seven industries, including power, steel and cement, as well as the two fields of transportation and construction, account for over 90%.

Based on the environmental institute’s research results, sectors including steel, cement, electrolytic aluminum and chemicals can take the lead in peaking carbon emissions during the 14th Five-Year Plan period from 2021 to 2025, while others such as transportation, petrochemical and electricity will have to wait until the next five-year period, he said.

However, Wang noted that the biggest pressure on the goal comes from the power sector, which produces roughly 40% of domestic carbon emissions. He said decision makers should arrange paths to peak emissions for various industries in a way that will avoid leaving all the pressure to the very last moment.

Since late September, many parts of China have suffered power shortages, forcing the government to increase coal supply to tackle the energy crisis.

The country is expected to invest 21 trillion yuan ($3.3 trillion) to achieve its carbon peak goal by 2030, Wang said, adding that the funds will be used to adjust the national energy structure, improve industrial technology and recycle resources, among other aspects.

He has also called on authorities to roll out measures targeting the power sector to accelerate the development of wind and solar energy — two types of renewable energy resources — as well as arranging the use of nuclear and biomass resources.