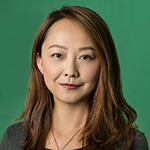 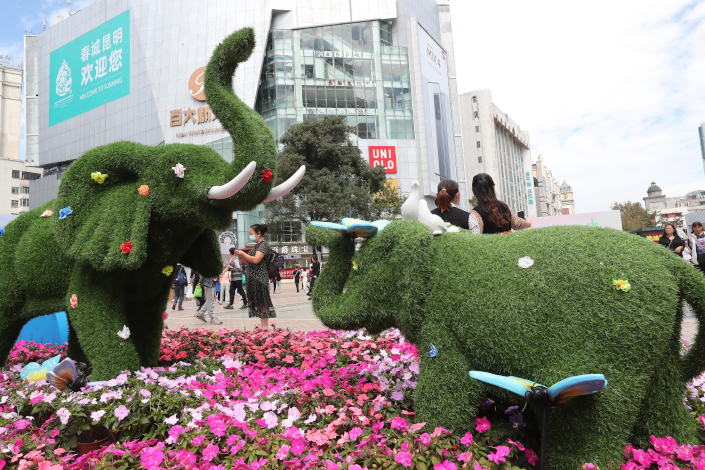 A plant sculpture of two elephants stands in a bed of flowers on Sept. 29 in Kunming, Southwest China’s Yunnan province. Photo: VCG

Elephants were the stars of the United Nation Biodiversity Conference in Kunming last week. On Oct. 11, when close to 3,000 offline plus 2,000 or more online delegates gathered in the peacock-shaped grand conference center by Dian lake in China’s “City of Spring”, they were greeted not only by hospitable volunteers, but also by sculptures of giant Asian elephant made of lush greenery and fresh flowers – all specialties of Yunnan province.

The famous "straying elephants" which the sculptures referenced left their home in the sub-tropical rainforest of Xishuangbanna in southern Yunnan last year and marched hundreds of kilometers north, causing a stir as they almost reached the southern tip of Dian lake this Summer. These elephants received care and attention along the way before finally heading back south under escort. Experts are still debating the potential drivers behind this unprecedented journey, including the growth of the herd due to protection efforts and the fragmentation of their natural habitat because of land use activities. There was a joke about them coming up to Kunming to join the biodiversity conference — making the upcoming U.N. session a dinner table topic for the first time.

The story of this Asian elephant family was mentioned in the speeches of the Chinese ministers and even the President over the conference week. A smart move indeed — it is not only a heart-touching story about the love and care for these creatures, but also a perfect example of the challenges facing wildlife and progress being made in habitat protection, the struggle between local community and its often-magnificent neighbors. The story of the herd draws out many of the questions that countries need to answer at the U.N. biodiversity convention, such as how to manage the utilization of natural species without damaging the life sustaining functions of the ecosystems, how to ensure equitable sharing of the benefits of such utilization, and how to mobilize resources and ensure stronger actions to protect all. These are all tough questions. Not to mention the incredibly wide economic and societal scope they touch on in very distinct geographies.

Over 190 countries as parties of the U.N. Biodiversity Convention set up intricate goals in Aichi, Japan in 2010. A lot have been done since then, but global trends of biodiversity loss haven’t slowed down as envisioned. The “2020 Kunming U.N. Biodiversity Conference”, or COP 15 – CP/MOP10 -NP/MOP4 in legal terms, is expected to negotiate and agree on the framework for the post-2020 global actions to save nature, with a vision to reverse the deterioration no later than 2030.

For the U.N. biodiversity convention, the elephant in the room has been the low political and public attention the topic has received compared to climate change for example. This led to a lack of ambition on goal setting, and of resources to make things happen faster. Scientist and the NGO community have been calling for the protection of 30% of land and ocean area by 2030 globally as a shared goal, together with finance and other means of implementation as dual focus of the post-2020 framework. The progress so far before Kunming has been slow.

Due to the lasting impact of the pandemic, the real offline technical negotiation on final agreements was postponed to April 2022, also in Kunming. So this week’s Part One was designed to be a ceremonial opening and political preparation stage. As a result, the tone in the conference center was calm.

There were two highlighted moments. On Tuesday Oct. 12, China’s President Xi announced the first batch of five National Parks of China – with a total size of 230,000 square kilometers, and more importantly a 1.5 billion yuan ($233 million) hosting country pledge to the Kunming Biodiversity Fund to support other developing countries’ protection efforts. This is a courageous act of leadership especially considering the economic challenges brought by the pandemic. And it could jump start an urgently needed conversation on biodiversity finance, with an important leveraging effect on other sources of finance as well. Hours after Xi’s speech, Japan announced an increase in their finance pledge too. May it open a long list of donor countries contributing in this regard.

On Wednesday Oct. 13, the key outcome of this week – The Kunming Declaration was agreed and announced. Content-wise, it outlined the skeleton of what might become the post-2020 Kunming agreement next April. The most critical elements were all included, for example the overarching design of the legal framework, the key drivers of biodiversity loss and main action options, stakeholder engagement and inclusiveness. As introduced by Chinese ministers, the political declaration consolidated high level political commitments from countries to reach agreement on this important topic, pointing out the direction of travel to the next stage of real negotiation when delegates can meet face-to-face. The strong willingness and faith in multilateral process is evident and reassuring. The tough questions however, were left for countries to answer in the next six months. For example, the one on 2030 ambitions and the mechanism to ensure implementation.

The later half of the week was dedicated to the Ecological Civilization Forum. Topics ranged from best approaches to protected areas, ways to enhance co-benefit and synergy between saving ecosystems and fighting climate change, to accounting ecosystem services at county level and moving banks to do more on biodiversity. With hundreds of researchers, practitioners and policy makers sharing and debating on the key topics of actions, and a full room of people fanatically taking notes, the energy level in the venue felt quite high. Although not part of the U.N. legal process, these vibrant conversations exhibited how “biodiversity” — a rather technical term once only familiar to ecologists – has been gaining more hearts and minds in the policy and public arena. This is clearly still not enough though, if compared to just how many side events, celebrities and politicians a climate conference could summon. The sense of urgency, although mentioned in many speeches, still seemed weaker too.

To participants familiar with both climate and biodiversity global environment governance processes, there’s a light sense of irony: climate change and biodiversity are rooted in the same systemic failure in our world after all. As many scientists and ministers stressed online and offline, what we need are transformative actions together. A lot of what’s said in Kunming is likely going to be repeated at the 2021 Glasgow U.N. Climate Conference in two weeks. Our vision on a profound transition out of the current destructive economic paradigm should transcend differences and be shared. And in both the Biodiversity Convention and the Climate Convention, it needs to be better iterated, as soon as possible. Ahead of us is a decisive decade in our planet’s destiny.