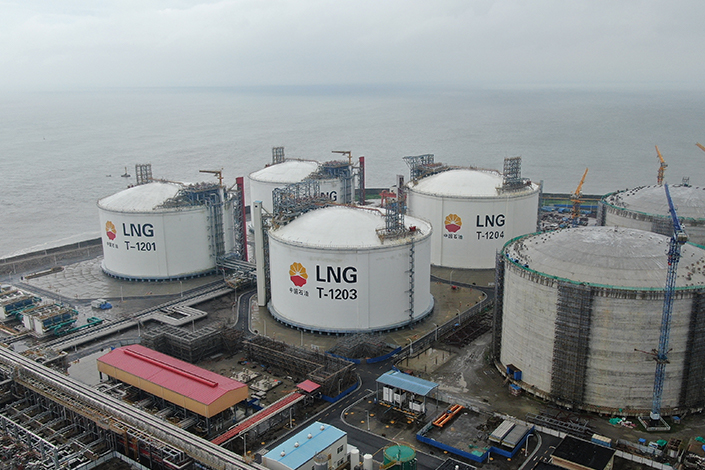 It was the first long-term LNG contract with a U.S. firm for Sinopec, also known as China Petroleum & Chemical Corp. (600028.SH), as well as the largest single trading volume of LNG between the two countries within the last 10 years.

Chinese companies have so far this year signed more long-term contracts with foreign LNG producers than ever before, for a total of 17 million tons annually, of which firms in the U.S. accounted for more than 5.8 million tons. This is followed by Qatar with 5.5 million tons, Russia with 5.16 million tons, and London-based BP PLC with over 875,000 tons.

The total long-term contract trading volume this year is a record high, surpassing the 2018 figure of 12.4 million tons, according to a report by Huatai Securities Co. Ltd. (link in Chinese).

Long-term contracts are a common way for energy companies to secure supplies and avoid incurring financial losses brought about by inflation. In late September, prices of this fossil fuel surged to a record high amid depleted energy inventories and coal shortages. The Japan-Korea Marker, North Asia’s benchmark for tracking LNG shipments, jumped to $34.47 per million British thermal units on Sept. 30, the highest on record since 2009, according to Bloomberg reporting.

“Natural gas is the essential element for the country to reach its carbon reduction goals,” according to a document titled China Natural Gas Development Report 2021 (link in Chinese) by the National Energy Administration. It is also estimated that the country will consume between 365 billion to 370 billion cubic meters in 2021, which is about a 10% jump compared to 2019.

Chinese firms have been burned on long-term energy contracts before. Sinopec and two other Chinese state-owned energy majors, PetroChina Co. Ltd. and China National Offshore Oil Corp., had signed a batch of long-term LNG contracts for 15 to 25 years when oil prices were on a rollercoaster ride between 2008 and 2014 with a “take-or-pay” clause, which forces buyers to purchase goods by a certain date at the contracted price no matter how the current spot prices change.

As a result, the three majors suffered huge losses when the price took a sharp drop. Price negotiations are allowed only every five or 10 years.

These deals also come after the U.S.-China phase one trade agreement that was signed in January 2020, in which China promised to purchase at least $200 billion more in U.S. goods. Energy products account for approximately 26% of this total.

Executives from the three majors all estimated that international natural gas prices will remain high during this winter due to increasing demand during a petroleum forum (link in Chinese) on Oct. 28.