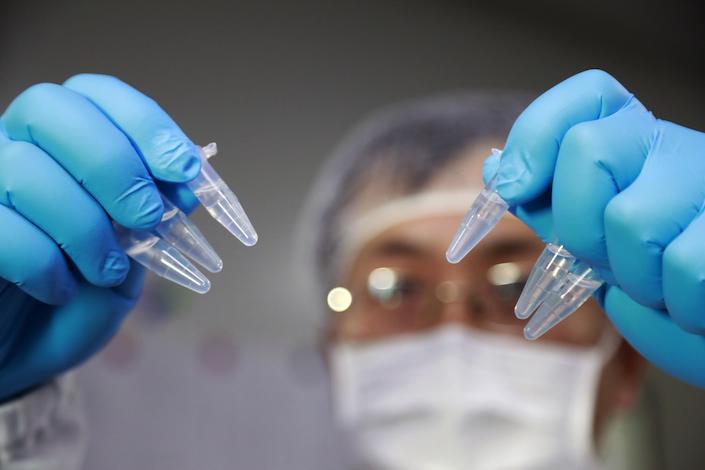 Chinese regulators took a step toward clearing the use of mRNA vaccines as booster shots to protect against Covid-19.

An mRNA vaccine jointly developed by Chinese biotech company Walvax Biotechnology Co. and Suzhou Abogen Biosciences won administrative approval to conduct a Phase 3b clinical trial of the shot, Walvax told Caixin. Approval was granted to assess the efficacy and safety of using the mRNA vaccine as booster shots for adults inoculated with inactivated-virus vaccines, according to public records on the Ministry of Science and Technology website.

No mRNA-based Covid-19 vaccine has been approved so far in China, although the advanced vaccine technology has been widely used in the West. Several domestic companies are racing to deliver shots using it. Walvax and partner Suzhou Abogen are the front-runners among domestic players. Germany’s BioNTech and its Chinese partner Shanghai Fosun Pharmaceutical Co. Ltd. are conducting final-stage tests of its widely used mRNA vaccine to launch in China.

News about the Walvax approval drove up the company’s Shenzhen-traded shares by as much as 20% Wednesday. Fosun Parma also jumped nearly 10% in Hong Kong.

Drugmakers often divide Phase 3 trials of new medicines into two steps. Companies can apply for marketing approval after completion of a Phase 3a trial, while a Phase 3b trial further tests a drug’s indications and other key clinical features. It still takes several months for a new drug to win final marketing approval.

The Phase 3b trial was filed by the Disease Control and Prevention Center in the Guangxi Zhuang Autonomous Region in southern China, according to the Ministry of Science and Technology website. The trial will cover people ages 18 to 59 as well as those older than 60, according to the records.

Under a plan published by Walvax in July, the Phase 3 trial of its mRNA vaccine, known as ARCoV-005, could be carried out in several counties in Guangxi and the southwest province of Yunan until Nov. 30, involving 1,500 in the vaccinated group and 500 in a placebo group. Walvax said it launched Phase 3 clinical trials for ARCoV-005 in countries including China, Mexico, Indonesia and Nepal.

The Chinese mainland has vaccinated nearly 80% of its more than 1.4 billion people and has started offering booster shots to people in several provinces and cities as new outbreaks of the delta mutation spread.

In Hong Kong, a third shot will be offered starting Nov. 11, with local health authorities recommending mRNA vaccines as boosters.