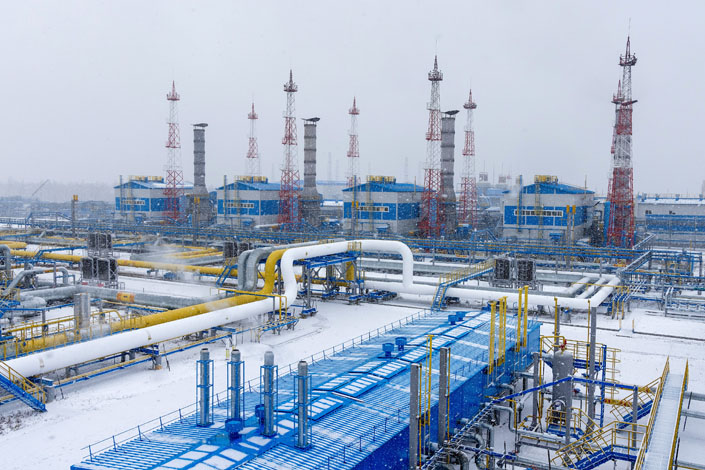 Crude oil prices topped $100 a barrel for the first time since 2014 as Russia’s pre-dawn assault on Ukraine roiled markets.

As the world weighed the human toll, watching on screens as black plumes of smoke rose from Ukrainian cities, analysts who track commodities were still broadly playing down the prospect of an all-out land war.

“Oil could jump by another $10 a barrel as the conflict intensifies, but an agreement could be reached after a series of operations,” said Will Sungchil Yun, senior commodities analyst at VI Investment Corp. in Seoul.

China Rejects U.S. Suggestion It Was ‘Complicit’ in Ukraine Invasion

An annual policy document that sets the tone for the Chinese government’s rural plans called for doing more to protect women and children as well as guarding against a resurgence in poverty and ensuring a stable food supply.

The No. 1 document (link in Chinese), jointly issued Tuesday by the State Council and the Central Committee of the Communist Party, mentioned the need to effectively improve rural governance and maintain safety and stability, requiring harsh crackdowns on illegal acts and crimes that violate and harm the rights of women and children.

Analysis: Shackled mother of eight is only one of thousands of trafficked women

A banking industry body overseen by China’s central bank wants banks to stop offering a deposit product to clients other than the insurers, the national social security fund and certain pension funds it was designed for in a bid to curb reckless competition for deposits, Caixin learned.

The body, the self-discipline mechanism for market interest rate pricing, issued a notice requiring banks to follow the rules that govern the product, known as an “agreement deposit” (协议存款), several sources with knowledge of the matter said Wednesday.

The Chinese mainland is battling a new wave of local Covid-19 outbreaks as at least a dozen regions have discovered cases of the omicron or delta variants, including the capital Beijing and the initial pandemic epicenter of Wuhan.

On Wednesday, the mainland confirmed 85 new locally transmitted cases in 10 provincial-level regions — including Inner Mongolia, Hubei and Guangdong — according to the National Health Commission. It also recorded 24 new asymptomatic cases in some of these regions as well as in Hebei and Heilongjiang provinces.

The incident came just two weeks after the sudden death of a 25-year-old content reviewer at short video platform Bilibili Inc., renewing discussion of high pressure and long working hours in China’s tech sector that have been linked to a number of employee deaths.

A unit of State Grid Corp. of China sold its 19.9% stake in Australian electricity and gas distribution company AusNet Services Ltd. for A$1.79 billion ($1.3 billion), more than twice what it paid in 2013, State Grid said Monday.

The Chinese state-owned power company said its overseas subsidiary State Grid International Development Ltd. sold the stake for A$2.65 ($1.91) per share, a 117.2% premium from the A$1.22 per share it paid nine years ago.

Pandemic proves a boon for Lenovo

Lenovo Group Ltd. reported record quarterly revenue and profit as the world’s No. 1 PC maker continued to benefit from people working from home amid the Covid-19 pandemic.