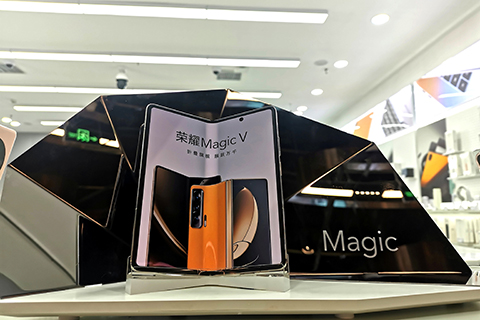 As Chinese suppliers begin to catch up in foldable phone technology, domestic smartphone brands are betting that the novel technology will set them apart in a highly competitive yet relatively stagnant handset market.

It comes even as high manufacturing costs, troubling failure rates and a lack of software remain significant hurdles.

With their bendable displays, foldable phones function like a regular handset when folded, but unfold to form a larger screen resembling a tablet.

Shanghai currently has no plan to seal off the entire city or shut down all social activities, the municipal government said Tuesday after imposing strict travel restrictions on its 25 million residents amid a growing Covid-19 outbreak.

Gu Honghui, Shanghai’s deputy secretary-general, said at a press conference (link in Chinese) that the recently ramped-up curbs were targeted and would be adjusted dynamically to minimize their impact on residents.

Chinese stocks get another drubbing as uncertainty overwhelms investors

Chinese stocks traded on the mainland and in Hong Kong continued to get hammered Tuesday in a sell-off that persisted as investors shrugged off upbeat economic data and focused on geopolitical turmoil, regulatory risks and a resurgence of Covid-19.

Chinese metal giant Tsingshan Holding Group Ltd., caught in a massive short squeeze amid an unprecedented rally in the price of nickel, reached a deal with banks to avoid further margin calls.

Tsingshan, one of the world’s biggest nickel and stainless steel producers, worked out a standstill arrangement with a consortium of hedge bank creditors that will allow the company to continue discussions with banks on a secured credit facility to cover its nickel margin calls and settlement requirements, the company said Monday in a statement.

After a meeting between China’s top diplomat Yang Jiechi and U.S. National Security Adviser Jake Sullivan in Rome Monday, the two sides noted consensus on accumulating “enabling conditions” to bring bilateral relations back on track, according to the Chinese Foreign Ministry.

With “candid, in-depth and constructive talks,” the officials noted the need to “enhance mutual understanding, manage differences, expand common ground and strengthen cooperation” to help China-U.S. relations “return to the right track of sound and steady development,” the Foreign Ministry said in a statement.

Analysis: China’s fiscal spending will reach a record high in 2022

A billion-pound central London office tower has become the latest British asset disposed of by Hong Kong’s richest man after a local subsidiary of Li Ka-shing’s CK Asset Holdings Ltd. sold the 5 Broadgate complex for a 45% return on investment.

A subsidiary of South Korea’s public pension fund paid CK Steel (UK) Ltd. 1.2 billion pounds ($1.56 billion) for the block, purchased for 1 billion pounds three and a half years ago, according to a Friday exchange filing. CK Asset’s calculation of the return included rental income and hedging profits.

The development of the world’s largest known untapped iron ore reserve in West Africa was halted again after the interim government of Guinea said Thursday there has been “no progress” with getting foreign investors in the project to work toward the country’s interest, which includes the construction of a railway.

Chinese investors are among the main forces pushing the Simandou project forward as it could bring down prices for China’s steel mills and may even further reshape the global supply chain. The project’s development has become more important to China as Beijing looks to cut imports of Australian iron ores amid geopolitical tensions with Canberra.

New York-headquartered IBM hired Chen Xudong as the new general manager of its Greater China operations, according to a statement (link in Chinese) released Monday. The new hire comes as Chen Liming, chairman of IBM Greater China Group, is about to retire.