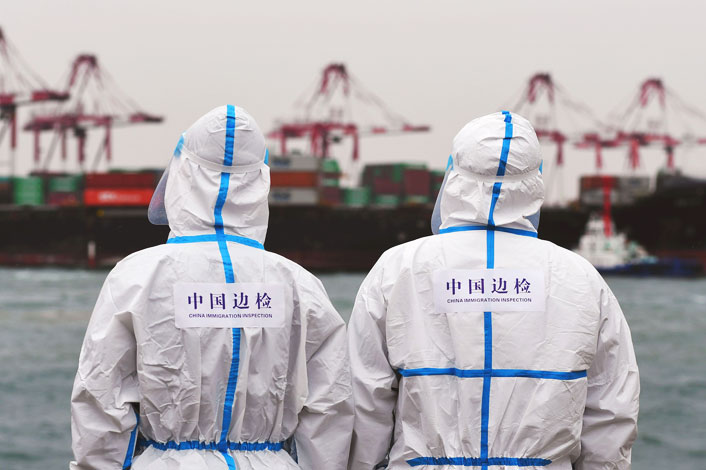 According to the General Administration of Customs, China’s total trade in goods rose 10.7% to 9.42 trillion yuan in the first quarter, including a 13.4% increase in exports and a 7.5% rise in imports

Shanghai businessman Du Chuankui has been stuck at home for more than a month as the city locked down most of its 25 million people since late March to contain Covid-19. After nearly 20 years in the export industry, Du is now anxious about the future of his business.

Du runs a plant in the Jinshan District of Shanghai’s southwestern suburbs, making massage and beauty devices mainly for overseas customers. Annual sales top 400 million yuan ($60 million). The lockdowns halted production at Du’s plant. He contacted clients and sought delivery extensions, but if output can’t resume in May, some customers are likely to switch to rivals, Du said.

The phone woke Wang Xiaomei early in the morning May 1. The call was from the Shanghai nursing home where her sister lived for more than a year, and the news was bad. The sister was dead at the age of 75.

Xinchangzheng Welfare Hospital, the nursing home, has been closed to visitors since the beginning of March after a Covid-19 outbreak hit the district. Since April 8, several residents and staffers were found to be infected, including Wang’s sister.

Several regions in China plan to suspend issuance of a type of savings bond that requires buyers to be physically present at the bank when they purchase it to control the spread of Covid-19, sources told Caixin, as the country faces its worst wave of outbreaks since the start of the pandemic.

The Ministry of Finance said Thursday that it will issue a batch of three-year and five-year certificate savings bonds this Tuesday. However, multiple sources at financial institutions told Caixin that the issuance may be suspended in some regions as a way to avoid giving people a reason to leave their homes.

China slashed interest rates and flooded the economy with new credit for industrial enterprises and infrastructure projects as policymakers torqued up support for the real economy amid the worst Covid outbreak in two years. First-quarter lending to the property sector, however, continued weak.

Outstanding mid- to long-term loans to industrial enterprises surged 20.7% from a year ago to 14.39 trillion yuan ($2.16 trillion) at the end of March, the biggest expansion among all sectors, according to a report Friday by the People’s Bank of China (PBOC) on more than 8 trillion yuan of new renminbi loans in the first quarter.

China released new rules on what kinds of services livestreaming platforms can offer minors, including a ban on under-18s tipping livestreamers, as a campaign to reign in online “chaos” continues.

The new rules could threaten a promising revenue stream for livestreaming businesses, which typically take a significant cut of online “donations.”

Platforms are now prohibited from offering minors access to functions that would induce them to send money to livestream hosts, according to the announcement Saturday by several government agencies.

An Indian court put a hold on a government seizure of 55.5 billion rupees ($725 million) in assets belonging to Xiaomi Corp.’s India unit, allowing the company to use the assets to pay salaries and other operating costs.

The Directorate of Enforcement, an anti-money-laundering unit under India’s Ministry of Finance, froze Xiaomi’s assets late last month, accusing the company’s local unit of illegally sending money to three foreign-based entities with ties to its parent. The directorate accused the unit of falsely claiming the money transfers were for royalty payments to the entities, which it never received any services from.

Many Chinese high school students are at risk of losing out on overseas college places after the internationally recognized Advanced Placement (AP) exams were canceled in eight Chinese cities.

The annual exams are collateral damage of strict restrictions imposed during China’s worst wave of Covid-19 since the early days of the pandemic. Thousands of students now face difficulties rearranging their lives to take the exams, which raise their chances of securing a place to study in North America.

American semiconductor giant Texas Instruments Inc. said Sunday it has not fired any employees in China, but in a statement to Caixin it did not deny reports it has disbanded its Shanghai microcontroller (MCU) research and development unit.

The company also did not deny it issued dozens of staff in the Shanghai MCU team an ultimatum: accept a transfer to a different product line or resign without compensation.

Sinosteel gets permit to exploit iron ore in Cameroon