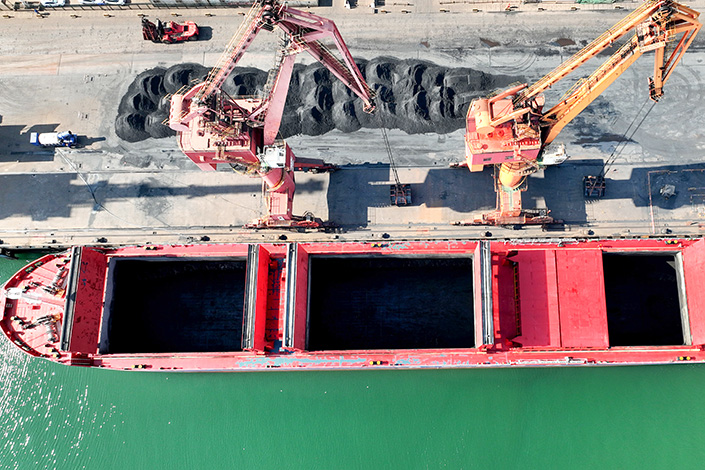 Coal is unloaded at Lianyungang port in East China’s Jiangsu province on May 24. Photo: VCG

On the last day of China’s Labor Day holiday in early May, some truckers in Inner Mongolia weren’t taking a break. They were in a queue stretching dozens of kilometers, all waiting to load up on coal at the privately-owned Erlintu mine.

The line of idling vehicles was so long it snaked back across the border into Shaanxi province, said Gao Jinxin, who works at a local mining company in the Inner Mongolia autonomous region.

At least 24 people have died and six more are missing as torrential rain continues to batter parts of China, according to state media reports and official statements.

Since late May, heavy downpours have triggered flooding and landslides in at least four provincial-level regions, forcing tens of thousands to flee their homes. Authorities have warned of an increased risk of floods and other rain-induced disasters in the near future, especially in southern China.

Foreign capital returned to China’s stock market with a bang in early June following a record sell-off earlier this year as an easing of Covid lockdowns and a slew of government policies to support the economy propped up investor confidence.

Overseas investors bought a net 26.1 billion yuan ($3.9 billion) of Chinese mainland-traded shares through the Hong Kong Stock Connect program in the first five trading days of June, topping the net inflow of 16.9 billion yuan recorded over the entire month of May and 6.3 billion yuan in April, data from Hong Kong Exchanges and Clearing Ltd. show.

Under the new regulations for the development, production and use of test materials, serious violations affecting the safety and effectiveness of the products would result in suspensions for producers and recalls, the National Medical Products Administration said Tuesday.

The State Administration for Market Regulation investigated 175 antitrust cases in 2021.

Chinese trust busters emphatically brought the hammer down on anti-competitive business practices last year, probing 60% more cases than in 2020 and imposing a 50-fold increase in penalties, according to the 2021 report of the State Administration for Market Regulation (SAMR) on antitrust enforcement.

The report showed the full dimensions of the government’s broad crackdown on big Chinese tech companies’ monopolistic behavior. Internet and platform companies were the focus of the regulatory assault. Fines imposed on such companies in 2021 reached 21.74 billion yuan ($3.26 billion), accounting for 92.1% of the total antitrust penalties of 23.6 billion yuan ($3.53 billion).

China Baowu Steel Group Corp. Ltd. has been crowned the world’s largest steelmaker for the second year straight, even as the country’s total steel output fell.

Archive Interview: Lee Hsien Loong on what Singapore can – and can’t – teach China