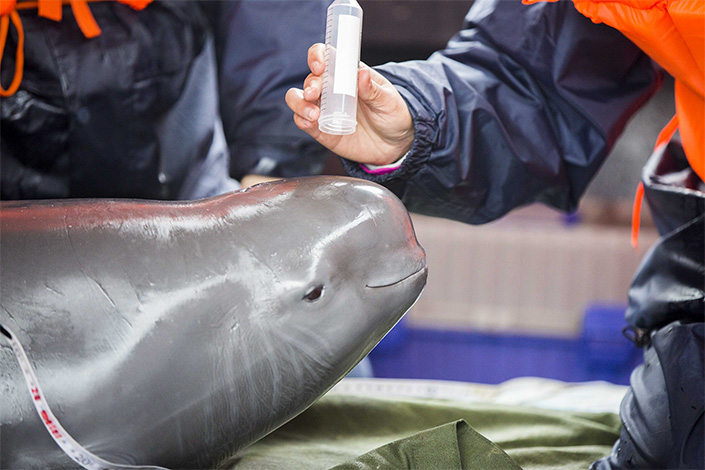 In Depth: How saving Poyang Lake will alter a complex ecosystem

Its unique ecology makes Poyang Lake China’s most important wetland with global influence. It is included in the List of Wetlands of International Importance by the Convention on Wetlands and is designated as a globally important ecological area by the World Wildlife Fund.

Huawei Technologies Co. Ltd. is seeking to raise 4 billion yuan ($593 million) from its fourth onshore bond sale this year in a sign that the Chinese telecom giant is increasingly tapping the domestic market for credit.

Chen Yong, 58, was named acting chief of the Shanghai People’s Procuratorate and appointed its permanent deputy chief after being chosen as the body’s top Communist Party official last week.

Tencent Holdings Ltd. is laying off staff at its nonfungible token (NFT) purchase and collection platform Huanhe (幻核), sources close to the Chinese internet giant told Caixin, amid intensified regulatory scrutiny over transactions in the tokens that aim to provide proof of ownership of digital assets such as works of art.

Huanhe, which has been operating only since August 2021, is also adjusting its development strategy to avoid regulatory risks, the sources said, although Tencent is still pursuing its plan to roll out an international version of Huanhe, other sources familiar with the matter said.

The son of Chinese retailing giant Suning’s founder lost a lawsuit in Hong Kong and was ordered to repay creditors $255 million.

The suit was brought last August by China Construction Bank (Asia) Corp. on behalf of Suning’s creditors to recoup losses stemming from the company’s default on a $165 million facility agreement and an $85 million secured note due last July.

Beijing issued a stern warning to Washington this week when news broke that Nancy Pelosi was planning a trip to Taiwan. But it came as relations between the two countries are looking up, with a string of high-profile meetings with senior officials from both sides showing willingness to rebuild lines of communication.

China’s Foreign Ministry Tuesday issued a statement saying it would take “resolute and strong measures” in response to the reports that Pelosi, speaker of the U.S. House of Representatives, would visit Taiwan on a diplomatic tour of Asia in August.

The Cyberspace Administration of China (CAC) said Didi, which took in 178 billion yuan in revenue in 2021, committed 16 violations including illegally collecting facial recognition information, according to a laundry list of breaches provided by the CAC in a Q&A fact sheet about the fine.

Chinese contract drugmakers Wuxi AppTec Co. Ltd. and Wuxi Biologics Cayman Inc. each unveiled a 10-year investment plan to expand their presence in Singapore — a boost to the Southeast Asian country’s effort to establish itself as a global biomedical manufacturing hub.

In a Tuesday statement, Shanghai and Hong Kong-traded Wuxi AppTec said it plans to invest S$2 billion ($1.4 billion) to build a new R&D and manufacturing site in Singapore, which includes laboratories and facilities capable of meeting a growing demand and advancing drug development.

Unlike doctors who are tasked with diagnosing and treating patients, China’s nearly 700,000 licensed pharmacists play a role in ensuring drug quality and explaining to people how they should take various medicines. But while many countries have passed specific legislation to regulate the sector, China has only regulatory documents.

Baidu, Pony.ai to be first to offer driverless robotaxis in Beijing

The Asian financial crisis 25 years on