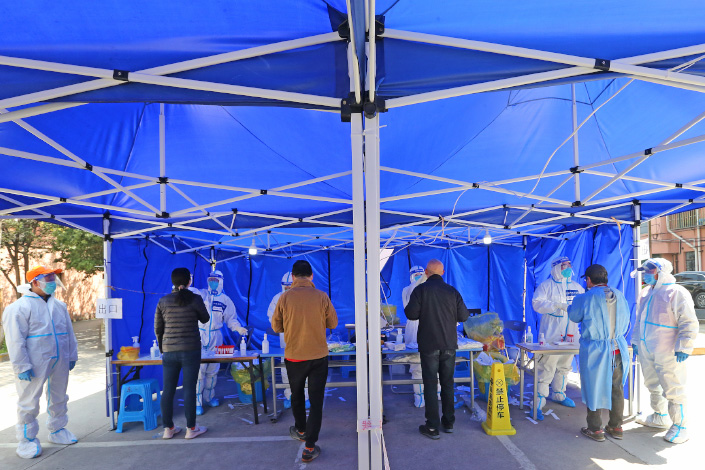 In Depth: China debates who should pay for public health crises

The Covid-19 pandemic exposed shortcomings in China’s medical system and triggered a national debate about how public health emergencies should be funded and what role the medical insurance system should play.

Health experts told Caixin that changes need to be made to the allocation of fiscal resources so that more money is set aside to cope with events such as Covid-19, and clearer rules are required that define the role of the medical insurance system in times of emergency and what its funds pay for.

At the Communist Party’s 20th National Congress, due to be held this fall, about 2,300 delegates from the party’s 95 million strong membership will gather in Beijing and make official the country’s political direction for the next five years.

Here are four essential things to know about the party’s electoral system.

U.S. expands ban on sales of chipmaking gear to China

A recent expansion of U.S. restrictions on China’s access to chipmaking technology will have a broad impact on the Chinese semiconductor industry, analysts said.

American authorities broadened their ban on sales of chipmaking equipment to China, according to Tim Archer, the chief executive officer of Lam Research Corp., a California-based supplier of silicon wafer fabrication gear. After previously barring shipments of machinery to produce advanced technology nodes of 10 nanometers or less, the U.S. expanded the restrictions to apply to chips of up to 14 nanometers, Archer said.

The contribution of high value-added industries such as biotech to China’s total economic inputs expanded in July due chiefly to a rise in capital investment, a Caixin index indicated Tuesday.

The Caixin BBD New Economy Index (NEI) came in at 31.4 last month, showing that new economy industries accounted for 31.4% of China’s overall economic inputs. The reading was up from 30.1 in June, rising for the second consecutive month.

American regulators added e-commerce giant Alibaba Group Holding Ltd. to a growing list of Chinese stocks that will be kicked off U.S. stock exchanges if authorities can’t inspect their books.

In the year since China launched its national carbon market, data fraud in agencies responsible for verifying emissions at power generation companies — the only type of firm now trading on the market — has emerged as a major issue, hampering efforts to increase efficiency in the market and giving authorities pause for thought before opening the market to other industries.

A string of cases, revealed earlier this year, has put the spotlight on verification issues that can undermine data quality, limiting China’s efforts to cut greenhouse gas emissions and realize its ambitious climate goals.

China’s largest electric-vehicle (EV) battery-maker stepped up a patent lawsuit fight against a smaller rival as it fights to maintain its technological advantage amid rising competition in the sector.

Indonesia briefly blocks PayPal in move to police its internet