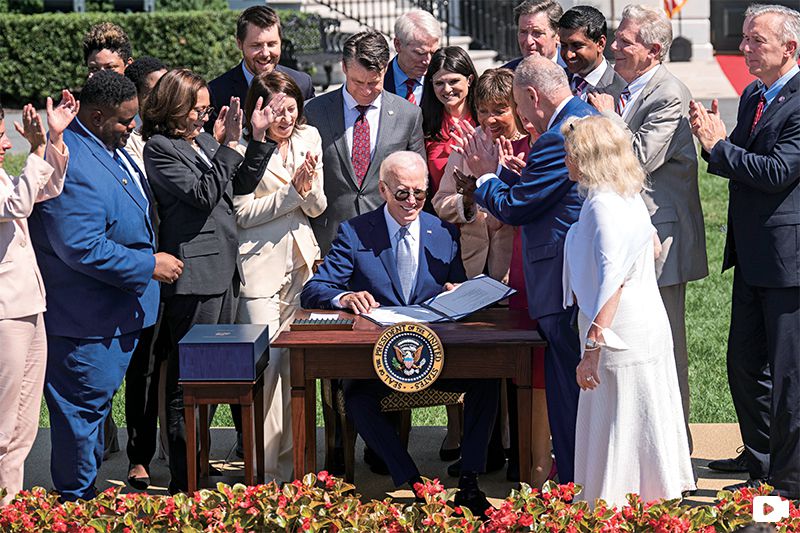 The CHIPS and Science Act of 2022 was signed by U.S. President Joe Biden on Aug. 9. Photo: VCG

Promoting the semiconductor industry is a key priority for Beijing.

Microchips are among the seven “core technologies” the country aspires to master, according to a 2021 economic blueprint. The scandal-struck “Big Fund” set up to invest in the industry has sucked up more than 300 billion yuan since 2014.

Communist Party’s 20th National Congress to kick off on Oct. 16

A Tuesday meeting of the Politburo of the Communist Party of China (CPC) set Oct. 16 as the starting date for the long-anticipated 20th National Congress at which the party will officially elect its new leadership, the Xinhua News Agency reported.

Shenzhen ramped up Covid-19 curbs with schools in some parts of the city postponing their fall term start date and more residents facing movement restrictions as the technology hub grappled with a fresh outbreak this week.

The Ministry of Housing and Urban-Rural Development, the Ministry of Finance and the central bank will support developers through special loans from policy banks, state broadcaster China Central Television reported.

Two of China’s policy banks invested a combined 300 billion yuan ($43 billion) to fund infrastructure construction and other eligible projects as part of an aggressive campaign to stimulate the ailing economy.

China lowers the boom on 234 arrested in village banking scandal

The Xuchang public security bureau said in a statement that the work of loss recovery has made significant progress and the investigation is proceeding.

Two major Chinese drugmakers reported plunging profits for the first half of 2022 as global demand for Covid-19 vaccines slumped.

Central China lake is drying up