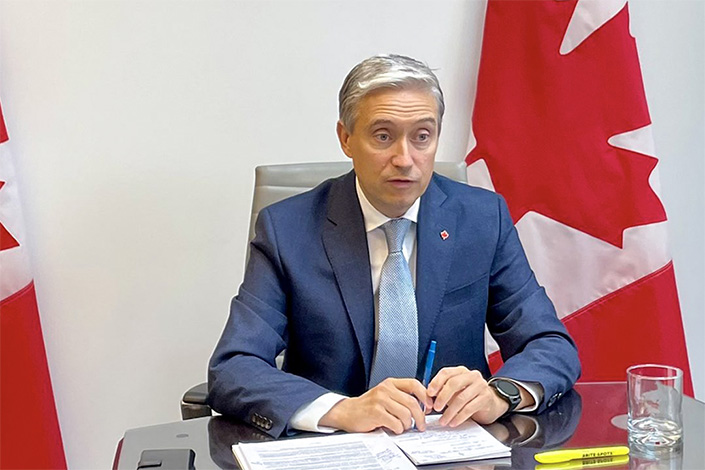 The Canadian government ordered three Chinese businesses to scale back their investment in lithium miners in the country, citing national security concerns over the supply of critical minerals and the nation’s green goals.

“Rigorous scrutiny by Canada’s national security and intelligence community” prompted the order, which was based on “facts and evidence and on the advice of critical minerals subject matter experts,” according to a Wednesday statement from Canadian Industry Minister François-Philippe Champagne.

A 32-year-old man in northwestern China’s Lanzhou sought help in rescuing his wife and 3-year-old son Tuesday from carbon monoxide poisoning. It turned into a three-hour nightmare of multiple phone calls to emergency services, a frantic effort just to leave the residential compound under Covid lockdown and a taxi ride to a hospital.

At the end, the father surnamed Tuo was told his son was dead. The wife recovered after an ambulance finally appeared to take her to the hospital.

Authorities in Lanzhou, the capital of Gansu province, pieced together a minute-by-minute account of what happened and acknowledged mishandling the emergency amid public questions about whether strict pandemic controls hampered the rescue.

The Caixin China General Services Business Activity Index, which gives an independent snapshot of operating conditions in services industries such as retail and travel, dropped to 48.4 in October from 49.3 the previous month. Readings of less than 50 signal contraction.

The Caixin China General Composite PMI, which covers both the manufacturing and services sectors, slipped deeper into contraction to 48.3 in October from 48.5 the previous month, marking the lowest since May.

State-owned China Bond Insurance Co. is expanding a debt guarantee program to help about a dozen property developers issue 20 billion yuan ($2.75 billion) of bonds to shore up an industry that’s mired in a liquidity crisis amid slumping housing sales.

Together with the National Association of Financial Market Institutional Investors (NAFMII) and the China Real Estate Association, China Bond Insurance summoned 21 private developers to a symposium Tuesday to update progress on previous guarantees for developers’ bond issuance and to listen to feedback.

Zhongrong International Trust to sell $367 million of bonds in Singapore

Fisher: China’s economy can weather a global recession — if one even hits

Tencent and China Unicom tie up in new joint venture

The State Administration for Market Regulation granted “unconditional approval” Tuesday for the deal. A Tencent unit will hold 42% of the new venture with a China Unicom subsidiary holding 48%. Employees will own the remaining 10%.

A regional bank in Northeast China that’s owed 32.6 billion yuan ($4.48 billion) by China Evergrande Group, one of the world’s most indebted real estate developers, has been given the go-ahead by a local court to auction or sell shares pledged by a subsidiary as loan collateral to recover the money.

Shengjing Bank Co. Ltd. obtained a notice of enforcement entitling it to sell a 30.99% stake in property-to-energy conglomerate Xinjiang Guanghui Industry Investment Group Co. Ltd., Evergrande said in a filing to the Hong Kong Stock Exchange Tuesday. The shares were pledged by Evergrande Group Co. Ltd., the subsidiary, when the parent company took out loans from the bank from 2020 to 2021.

Fast food giant Yum China Holdings Inc. reported a 98% year-on-year rise in net profit attributable to shareholders to $206 million in the third quarter as takeout sales helped offset the impact of Covid-19 restrictions on dining in, according to its financial statement published Wednesday.

The growth is a marked reversal from the previous two quarters, which recorded 54.1% and 56.5% year-on-year declines, respectively.

China locks down area around ‘iPhone city’ in blow to Apple