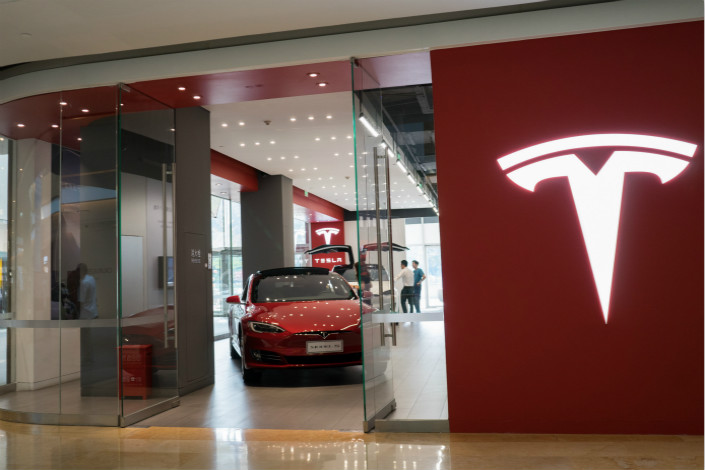 Tesla CEO Elon Musk said the planned plant in China would focus on production of the Tesla 3 and Tesla Y, two of the company’s latest models aimed at the mass market. Photo: Visual China

Tesla Inc. said it hopes to sell hundreds of thousands of its moderately priced electric vehicles (EVs) each year from a planned China manufacturing base, aiming to tap a new-energy car market likely to soon become the world’s largest as Beijing phases out gasoline-powered models.

In discussing its China plans, the U.S. company also pushed back against recent reports of an imminent launch of its first offshore manufacturing base, saying a new China-based factory won’t begin production for at least three years.

“The China plan is sort of … a rough target to start production in about three years. It would be serving the China market and perhaps some other countries in the region,” said CEO Elon Musk, answering questions on a call to discuss the company’s latest financial results released on Wednesday.

Musk said the new facility would focus on production of the Tesla 3 and Tesla Y, two of the company’s latest models aimed at the mass market, with prices starting at around $35,000. He added the company would only be able to meet its aggressive global sales targets if it can make and sell those models locally to avoid high costs of importing to China.

“The intent is to provide Model 3, Model Y … primarily for the Chinese market,” he said of the planned factory. “It’s the only way to make the cars affordable in China. But it’s three years out.” He added the new plant will have capacity to produce at least 200,000 cars per year, and possibly “in the hundreds of thousands of vehicles,” providing some of the first concrete clues about the size of the plant.

China is the world’s largest auto market, with about 28 million cars sold last year. Nearly all were powered by traditional fossil fuels. Beijing has been pushing hard to promote the development of a newer generation of new energy vehicles including EVs and hybrids, in a bid to clean up the country’s polluted air and create technologies that can be exported.

As part of that drive, the government has provided incentives to both car designers and buyers. It recently said it was crafting a timeline to phase out all traditional gas-powered vehicles, though no actual dates have been determined. At the same time, Beijing has also announced a new quota system requiring all carmakers to sell about 10% of their output as new-energy vehicles starting in 2019. Carmakers that can’t meet their quotas can buy excess credits from companies like Tesla that derive most or all of their revenue from new-energy vehicle sales.

Tesla has been in the headlines regularly over the last year, after word first emerged it was interested in building a local plant in China. The company confirmed in June that such talks were taking place in Shanghai, adding that it would have a more clearly defined production plan by year-end. (https://www.caixinglobal.com/2017-06-23/101104667.html)

One potential stumbling block would be Tesla’s likely insistence that it own all of or at least a comfortable controlling stake of any such plant, a condition that would be impossible under China’s current law limiting foreign ownership of such ventures to 50%. But Beijing is reportedly preparing to relax that restriction for new energy vehicles. Last week, several sources told Caixin such a move was coming first to China’s free trade zones.