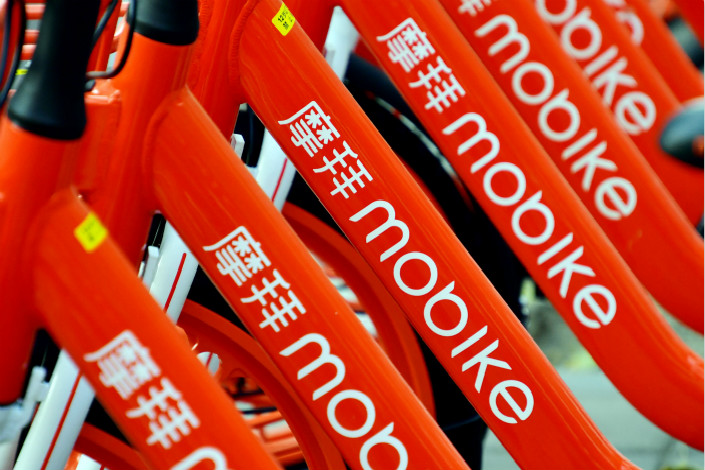 Unlike bikes, car-sharing requires heavy investment and faces significant obstacles, such as regulations and the need for infrastructure. There are now more than 300 companies that provide shared-car services in China. Photo: Visual China

FAW Car Co. Ltd, a subsidiary of FAW Group, said on Sunday it plans to buy 10% of Mobike Chuxing, the car-sharing arm of Mobike Technology Co. Ltd. No price was given for the investment.

The move came two months after Mobike Chuxing announced that it would partner with Guizhou-based Xinte Electric to launch a fleet of shared automobiles.

Under Sunday’s announcement, FAW Car — which has a government permit to produce electric cars — also said that it agreed to manufacture electric cars for Xinte.

Mobike’s move comes as China’s bike-sharing industry has become oversaturated, resulting in the recent collapse of smaller players including 3Vbike and Wukong. In another consolidation move last week, struggling major operator Bluegogo sold itself to car services giant Didi Chuxing, according to sources close to the matter.

Unlike bikes, car-sharing requires heavy investment and faces significant obstacles, such as regulations and the need for infrastructure. There are now more than 300 companies that provide shared-car services in China.

The majority of those are backed by automakers, including big foreign names. Mercedes-Benz, for example, introduced its car2go brand to southwestern China’s Chongqing last year, and BMW plans to launch 100 shared cars under its ReachNow subsidiary in neighboring Chengdu, Sichuan province.

But none have turned a profit, according to research by PricewaterhouseCoopers and Roland Berger. In October, car-sharing startup EZZY announced that it would cease operations and close down.

For automakers that are scrambling to meet new government quotas for electric car production, car-sharing platforms have become a better channel due to their stable demand. By comparison, the consumer market for electric cars has been much more unpredictable, industry experts have said.