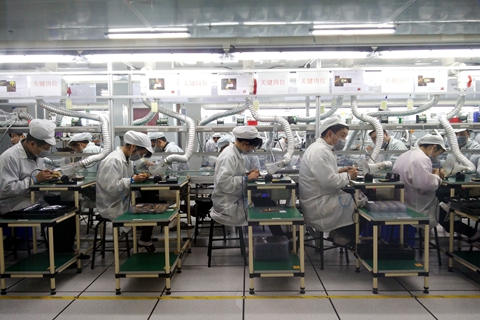 China exported 130 million mobile phones valued at $31.2 billion to the U.S. in 2017. Above: a mobile phone assembly line in China. Photo: VCG

Trump announced on Thursday plans to slap an import tax of 25% on about $60 billion of annual imports from China, citing intellectual property violations.

It’s still not clear which products will be targeted. Trump gave U.S. Trade Representative Robert Lighthizer 15 days to release a target list, followed by a 30-day public comment period. But the majority of products affected are expected to be from the high-tech sector.

About 80% of the mobile phones sold in the U.S. are manufactured in China.

But analysts say mobile phones and computers made in China are unlikely to be targeted because they are mostly exported under what is called “processing trade” — exports of final products made by imported parts. These fall under a different category than exported goods. Meanwhile, intellectual properties are usually well protected in the phone and laptop industries, analysts said.

Gao Shiwang, head of the industry development department of China Chamber of Commerce for Import and Export of Machinery and Electronic Products, told Caixin that he doesn’t expect mobile phones will be targeted.

The top 10 Chinese mobile phone exporters are the source of about 96.8% of the total exports of mobile phones to the U.S. Seven of these are OEMs, including iPhone assembler Foxconn.

The story on the laptop industry is the same, with 93% of the laptop exports made by assemblers of global brands.

A person close to Foxconn said the company is paying close attention to the tariffs development and assessing the potential impact.

If Chinese OEMs are hit by the new tariffs, it could trigger a shift in the whole industry, some analysts said. Manufacturing of mobile phones and laptops could be moved to Mexico, India or Southeast Asia, they said.

An industry observer told Caixin that China’s semi-conductor industry would be especially hard hit by the tariffs, pointing out that Huawei Technologies Co.’s recent bans by U.S. carriers were partly because it uses its own chips designed by its HiSilicon unit.

Best Buy Co., the largest consumer electronics retailer in the U.S., reportedly will pull the Chinese company’s phones from its shelves in the next few weeks.