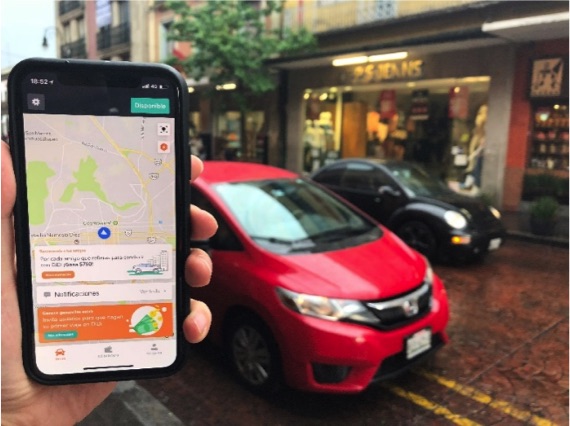 Didi Chuxing brings its own app-based ride-hailing service to Mexico, the first such expansion outside Asia. Photo: Didi

*Didi for the first time takes its own app-based ride-service outside Asia.

*The Mexico launch will again put Didi against Uber, which is a leading player in the country.

Didi introduced a local version of its car-hailing service app — Didi Express — in Toluca, a city about 60 kilometers (37 miles) west of Mexico City. Didi said it hopes to launch ride-hailing services to other major cities in Mexico later this year.

The move gives Didi another foothold in Latin America, the world’s third-largest ride-hailing market behind the U.S. and China. In January, Didi took over a ride-hailing service in Brazil called 99.

Mexico is the latest step in the Chinese ride-hailing giant’s global expansion. With 70 million internet users, the country is a key part of the fast-growing market. Through investments and partnerships, Didi has forged links with seven major international players and extended its business network to more than 1,000 cities, according to the company.

The Mexico venture marks a significant departure from Didi’s strategy of relying on local partners for foreign growth, however. This is the first time that Didi is taking its own app-based ride-service outside Asia.

Didi Mexico will introduce some of Didi’s key product innovations to Latin America for the first time. These include a real-time SOS system, dynamic safety monitoring, multi-person itinerary sharing, 24x7 user support, and a multivariable driver rating system, the company said in a statement.

Didi became the dominant player in China’s ride-hailing market after it beat and took over the China unit of Uber Technologies Inc. in 2016. Didi currently provides as many as 30 million rides daily to more than 450 million passengers, working with more than 21 million drivers, according to the company.

The Mexico launch will again put Didi against rival Uber, which is a leading player in the Mexico ride-hailing market. California-based Uber operates in 36 cities in Mexico with a client base of 7 million users, accounting 87% of the country’s ride-hailing market, according to the market research firm Dalia Research.

Didi started driver recruitment in Toluca in early April and has received “an enthusiastic response from drivers and passengers,” said the company.

Didi will not charge drivers commission fees during the first eight weeks of the service, Caixin learned from a Didi source. After that, the company will charge drivers 20%, compared with Uber’s 25%, the source said.

Last month, Meituan said it has taken one-third of the ride-hailing market in Shanghai and Nanjing. The new threat has pushed Didi to reintroduced subsidies for drivers, a sign that the sector could be headed into a new price war.

In January, Didi acquired Brazilian peer 99 in a deal believed to be worth $600 million. Previously, Didi took stakes in Southeast Asia’s Grab, India’s Ola, the Middle East’s Careem and Estonia’s Taxify, whose key market is Eastern Europe. In the U.S., Didi invested $100 million in Lyft, Uber’s main rival in the American market.

After a December fundraising, Didi is now valued at $56 billion, making it one of the most valuable tech startups in China.