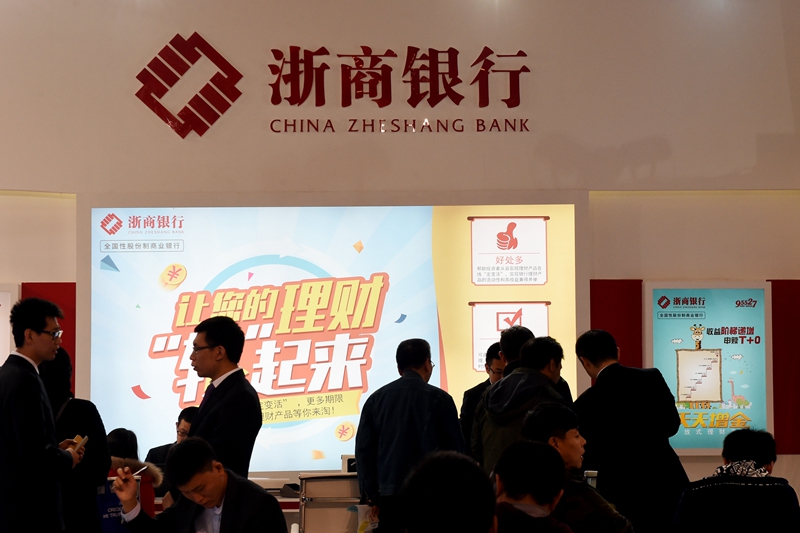 The meteoric rise of Zheshang Bank, a once-obscure regional financial institution based in Hangzhou, has raised market eyebrows and drawn the attention of regulators concerned about burgeoning risk in the industry.

In just four years, Zheshang Bank’s assets ballooned by 130% to 1.54 trillion yuan ($243 billion) at the end of 2017, making it one of China’s fastest-growing commercial banks. Behind Zheshang Bank’s eye-popping growth is the rapid expansion of off-balance-sheet asset management and lending businesses.

The bank is an example of how China’s small commercial banks have followed an aggressive and risky path to growth, counting on profits from lending activities that have largely fallen outside regulatory oversight.

As authorities have stepped up efforts to rein in financial risks, Zheshang Bank is among institutions that have come under closer scrutiny. Last year, the banking industry regulator dispatched several teams to inspect Zheshang Bank’s operations and ordered the company to improve compliance, sources close to the matter said.

More than 60% of Zheshang Bank’s fastest-growing assets until 2017 were from businesses in the asset management and interbank markets. Since last year, regulators have tightened scrutiny of such activities because they served as the main funding sources for shadow banking — loosely regulated lending outside the formal banking system.

Since 2014, Zheshang Bank has been an active player in the capital market. Through affiliated investment vehicles, the bank provided financial backing for a number of controversial deals and companies. These included private conglomerate Baoneng Group’s 2016 hostile bid for leading developer China Vanke Co. That deal relied heavily on borrowed money including funds raised via Baoneng’s insurance unit. It prompted regulators to crack down on risky investments by insurers and to step up a campaign against excess leverage of financial institutions.

Zheshang Bank is also a major creditor of the embattled tech giant LeEco, which has been caught in a cash crunch since 2016 and defaulted on significant debts to suppliers and creditors. Sources close to the bank said lax risk controls on loans to LeEco have exposed Zheshang Bank to at least 800 million yuan of bad loans.

In 2017, the share of Zheshang Bank’s non-credit assets, mainly asset management and interbank business, declined to 56% from the previous year’s 66% amid regulatory crackdown. The bank’s net profit growth slowed to 8% in 2017 from 44% in 2016 as it moved away from risky but high-yield business.

Zheshang Bank was set up in 2004 with a mission to serve small and micro businesses in its home of Zhejiang province, China’s hub of private manufacturers and traders.

The bank is 14.8% owned by the provincial government with the rest of its equity dispersed among a number of shareholders, including companies backed by private conglomerate Baoneng, Anbang Insurance and Wanxiang Group. Zheshang Bank was listed in 2015 in Hong Kong and is applying for a mainland listing. The China Securities Regulatory Commission said April 24 that it is reviewing the bank’s application for an A-share listing.

After Liu Xiaochun joined Zheshang Bank as president in August 2014, the bank made a major shift in strategy. Liu proposed that Zheshang Bank should try to become “the most competitive national lender and a major financial service platform in Zhenjiang,” according to company documents. Liu, now 59, was previously the head of the Hong Kong branch of China Agricultural Bank, one of the largest state-owned banks. Liu did not respond to a request for comment.

Liu and vice president Zhang Changgong were the main backers of Zheshang Bank’s aggressive expansion, bank sources said. Zhang is a former branch head of Industrial Bank who joined Zheshang Bank in 2015. Sources close to the bank said Liu and Zhang had similar visions of the bank’s development, but disagreements between them emerged as the bank grew. Zhang preferred an even more-aggressive approach than Liu, according to sources.

“Risk control often gave way to business performance in our bank,” said one Zheshang staff member. “But now we have made compliance and risk control the top missions.”

Under the new strategy, Zheshang Bank sought to diversify its business through partnerships with banks, non-bank financial institutions and other businesses.

Zheshang Bank became a big borrower on the interbank market — a main source of short-term funding for banks and nonbank financial institutions — and invested the money in higher-yielding assets, sometimes loans to risky borrowers that were unable to get loans through the formal banking system.

In 2015, Zheshang Bank’s loan business grew 33% while its investment business surged 116%, mainly in non-standard credit assets such as trust loans, letters of credit, accounts receivable and other debt-financing instruments that are not traded either on stock exchanges or the interbank market and stay off the bank’s balance sheet. In 2015, the bank posted annual profit growth of 38%, and in 2016, 44%.

Caixin learned that Zheyin has set up 104 funds with partners to invest largely in equity markets with money raised by Zheshang Bank from the interbank market and retail investors. In 2015 and 2016, Zheshang Bank invested 13 billion yuan through Zheyin in Shenzhen Jushenghua Industrial Development Co., a subsidiary of Baoneng, to fund the company’s purchase of Vanke shares, although a bank official denied that the funds were used for stock purchases on the secondary market.

Baoneng’s attempt to take over Vanke failed in late 2016 under regulators’ scrutiny of its capital sources and high leverage. Regulators also ordered Zheyin to cut its tie with Zheshang Bank, Caixin has learned.

But sources close to the matter told Caixin that Zheshang Chanrong is still controlled by Zheshang Bank and most of its shareholders are the banks’ shareholders and clients.

Some of Zheshang Bank’s transactions have turned out to be risky bets. Between July 2015 and April 2016, Zheshang Bank extended 3.65 billion yuan of loans to Leshi Internet Information & Technology, the main listed arm of LeEco, Caixin learned.

The loans were issued with Leshi’s shares as collateral. But as the company’s financial woes deepened and its share price tumbled, Zheshang Bank became exposed to at least 800 million yuan of losses, a bank executive said.

The loan deals with Leshi sparked controversy within Zheshang Bank as most of the loans were issued after LeEco’s credit crisis became visible following years of overspending, especially following the stock market meltdown in the summer of 2015.

Several Zheshang Bank employees told Caixin that the Leshi loan deals were rejected by the risk control departments in several branches, citing concerns over the company’s credit. However, the loans still went through.

“The Leshi deals failed to meet all criteria (of risk control), but were still approved,” said one source from the bank, adding that loans were pushed forward by executives at the headquarters regardless of the opposition by branch bank risk control departments.

“Zheshang Bank was performance-oriented at that time, and risk control was often neglected,” another bank source said.

Earlier this month, Zheshang Bank announced the resignation as vice chairman and president of Liu, an architect of the bank’s expansion strategy, citing changing duties. Liu’s departure fueled speculation of internal turmoil in the bank under the tightening regulatory oversight.