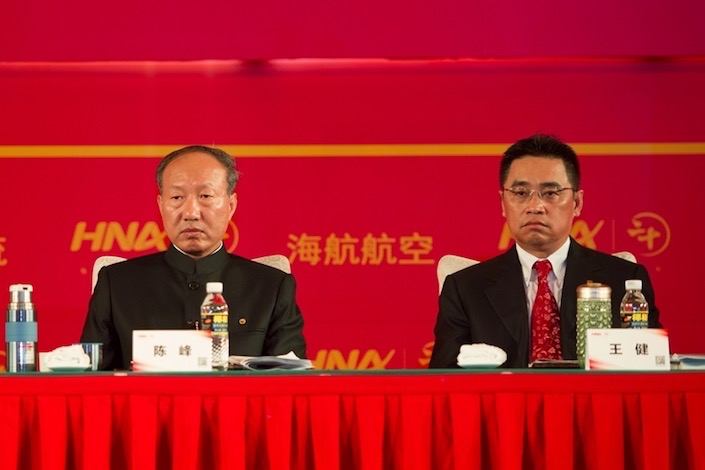 Editor’s note: The final chapter of HNA Group’s debt crisis is unfolding as it enters bankruptcy restructuring after more than two years of failed attempts to solve its troubles. Caixin reporters have closely followed the company’s rise and fall over the past five years and recorded almost every important moment that put the once high-flying conglomerate on its current course. One key moment came in July 2018 when HNA co-founder and Chairman Wang Jian died in an accident in France. The sudden departure of the mastermind behind the company’s aggressive overseas expansion led to a series of strategic adjustments. Caixin’s investigation unveiled how the company made a business U-turn shortly after Wang’s death. This report was originally published on Aug. 13, 2018.

(Beijing) — The jumbo jet that is HNA Group is making a U-turn on its soaring climb from regional air carrier to sprawling global conglomerate.

At a speed as rapid as its grandiose expansion into global assets including stakes in luxury hotels and a banking giant, the aviation-to-finance company is now unloading billions of dollars of assets to repay the debt that fueled its growth.

Over the past week, HNA Group Co. Ltd. announced two mega deals to sell stakes in Radisson Hospitality Inc. and Avolon Holdings Ltd., an aircraft lessor it acquired in 2015.

The two deals could recoup more than $4 billion for HNA. They come after a string of asset sales announced this year totaling 110 billion yuan ($16 billion) and are likely to be followed by more. Based on public records, Caixin calculated that over the past few years HNA spent $80 billion on overseas assets, much of it borrowed as debt ballooned to $111.5 billion by last year.

The pilot who set the course for HNA’s global expansion was co-founder and Co-Chairman Wang Jian, company sources said. He had long envisioned building HNA into one of the world’s 100 biggest companies by revenue. By 2017, he succeeded in getting HNA up to No. 170 on the Fortune Global 500 list.

But HNA hit the brakes on its ambitious growth in the second quarter of 2017 amid stricter regulatory scrutiny of Chinese companies’ debt-fueled foreign investments. The company apparently started reversing course with a string of asset sales. HNA expected to sell off about 300 billion yuan of assets this year, Wang told Caixin shortly before he died in an accident in France July 3.

Wang’s death may have marked the end of HNA’s era of expansive growth. His successors, including co-founder and Co-Chairman Chen Feng, have stepped up HNA’s strategic shift back to focusing on its core aviation-related businesses. Chen, 65, assumed Wang’s duties as sole chairman of HNA last month, as part of the company’s management reshuffle. Caixin was unable to reach Chen for comment.

Since late July, at least three HNA units have stepped back from the financial services industry. HNA said in an Aug. 1 statement that it aims to continue to scale back its presence in the financial sector so it can refocus on its core aviation, tourism and logistics businesses.

The moves were in line with government calls. On July 8, Mao Shaofeng, a deputy governor of Hainan province where HNA is headquartered, said during a meeting with company executives that aviation is the backbone of HNA and that only by sticking to its core business can the company grow into a sound global competitor.

HNA stepped into the limelight around 2015 with a series of high-profile acquisitions, although it had started an overseas foray a few years earlier seeking cheap assets in the aftermath of the global financial crisis.

Between 2015 and early 2017, HNA frequently made headlines with a string of startling deals including the $6.5 billion purchase of 25% of hotel giant Hilton Worldwide Holdings Inc., the $6 billion takeover of computer parts distributor Ingram Micro Inc., the acquisition of a 10% stake in Deutsche Bank and purchases of offshore airports, properties and other assets.

The spending spree sparked speculation about its opaque ownership structure and the source of its funds. Outsiders wondered whether HNA had an explicit tie with the Chinese government. Mounting market concerns forced HNA in 2017 to disclose its shareholding structure for the first time, identifying its major shareholders including company founders and two charitable funds.

The company “was built up by several founders”, the late executive said in a meeting in Paris in June, 2017.

But HNA did have some state DNA in its origins. In 1989, following the establishment of Hainan — a huge, remote southern island — as a province, the provincial government decided to set up a local airline company with 10 million yuan of registered capital. Starting from scratch, the planned Hainan Airlines faced difficulties from the beginning because of a lack of capital, airplanes and talent. “Several teams before us had failed to get the company off the ground,” Wang said in an interview with Caixin.

In 1990, Wang and Chen along with several co-workers from the Civil Aviation Administration in Beijing quit their jobs to join the new airline. Wang and Chen both soon became vice presidents before losing their jobs amid turmoil at the startup airline, according to Wang.

Wang and Chen became co-chairmen of the company. The pair both kept a low profile and seldom made public appearances, but they were seen as the twin engines powering the company. In recent years, Chen focused on HNA’s aviation-related business and communication with the government while Wang took charge of HNA’s financial operations and overseas acquisitions, sources close to the company said.

According to information released by HNA in July 2017, its two largest shareholders were charitable funds. One, the U.S.-registered Hainan Cihang Charity Foundation, held 29.5% of the company while a similarly named foundation based in Hainan held 22.75%. Wang and Chen, each with a 14.98% stake, were the biggest individual shareholders.

At Wang’s memorial service July 13, HNA announced that his holdings would be donated to the China-based charity in accordance with his wishes. Sources with knowledge said the holdings could worth 70 billion yuan.

According an audit report released in April, HNA had 1.23 trillion yuan of assets by the end of 2017, up 21% from a year earlier. Its 2017 revenue more than tripled year-on-year to 587 billion yuan. HNA Chief Executive Officer Tan Xiangdong told media late last year that the company also held about 1 trillion yuan of off-balance sheet assets.

The ballooning assets were backed by HNA’s aggressive acquisitions, which in turn were mostly financed by debt using newly acquired assets as collateral. HNA’s overall debt rose by more than two-fifths from 2016 to 2017, reaching 740 billion yuan ($111.5 billion), according to financial reports.

The debt-fueled expansion had run smoothly until regulators stepped on the brakes. In June 2017, China’s banking regulator directed lenders to examine their exposure to some of the most acquisitive Chinese companies, including HNA, Dalian Wanda and Fosun International Ltd. The regulator’s warning soon prompted lenders to tighten their credit controls on the companies.

Wang sought to downplay the impact of the regulatory order on his company’s liquidity. Instead, he said HNA was being squeezed by outbound investment curbs imposed by China’s top economic planning agency, the National Development and Reform Commission, which was concerned about possible bubbles and excessive capital outflow.

HNA’s cash crunch began to emerge in late 2017 as reports circulated of missed payments to banks, suppliers and fuel companies. In November, S&P Global cut HNA’s credit rating to B- from B+, citing its “aggressive financial policy” and tightening liquidity amid looming debt maturities. “We will closely monitor HNA Group’s access to capital markets and funding costs to determine whether additional actions are necessary,” S&P said.

HNA has since stepped up massive sell-offs, unloading its stakes in Hilton, Deutsche Bank and properties and financial assets at home and abroad. HNA said last month that it had completed asset divestiture totaling 60 billion yuan as of the end of June.

With the ongoing asset sales, HNA has culled its pillar business lines from seven to four. Since March, for example, its industrial investment and new-media businesses have been either merged or abandoned.

“We were too aggressive and kept our profile too high, and we failed to hold true to our mission,” Wang told Caixin.

On July 19, Fortune published its new Global 500 ranking. HNA was no longer on the list, although the company could rank as high as No. 78 based on its 2017 financials. In response to Caixin’s inquiry, an HNA spokesperson said, “We are now focused on business and dedicated to our works.”