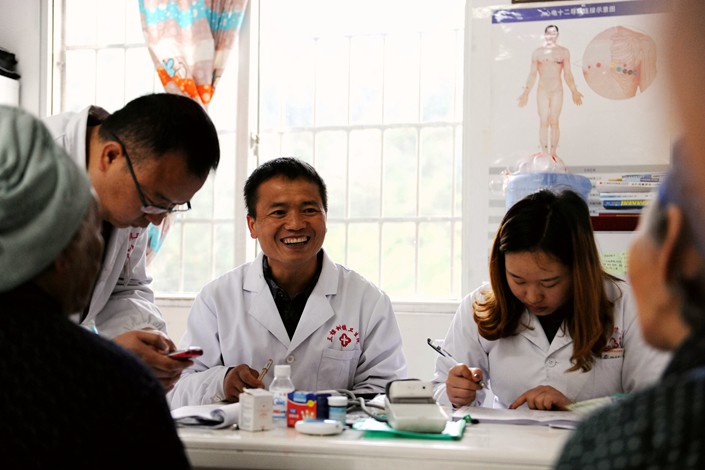 China’s plan to shift from treatment-focused to a prevention-focused health care system will not be an easy pill to swallow, experts said at a recent forum in Beijing.

Under the Healthy China 2030 plan issued by China’s State Council in 2020, the country has been trying to move away from merely treating diseases toward preventing them through promoting general health, Luo Xiaobin, vice president and chief medical officer of mobile health care platform More Health, said at an industry dialog at Beijing’s Penn Wharton Center recently.

The shift is a response to the increasing prevalence of deaths caused by lifestyle-related, rather than contagious, diseases, Luo said.

“For China, waiting until people are sick before investing in hospitals where they can receive treatment is definitely not the solution,” Roberta Lipson, founder and CEO of private health care group Beijing United Family Hospital, said, echoing Luo.

However, a prevention-focused health care system requires resources China still faces a shortage of, including talent and medical facilities, experts speaking at the event pointed out.

The country in particular lacks general practitioners at the local level, Luo said, resulting in the growth of “an industry unique in the world” — large numbers of private companies offering third-party medical examinations.

But while many companies offer employees free annual medical examinations, and there are many providers of the service, China still lacks a system for making targeted health interventions based on the results of these tests, according to Luo. At the same time, Luo added, many people still do not receive regular health checks, a situation that ultimately leads to high medical costs when undetected diseases emerge at later, harder-to-treat stages.

According to the hierarchical medical system advocated by the Chinese government in recent years, general practitioners are the “gatekeepers” of health for every Chinese citizen, and are expected to provide basic community services to relieve the burden shouldered by medical institutions higher up in the system.

China’s current solution to its shortage of general practitioners is to send specialists on three-week or three-month rotations at community health centers, “but in many cases, this does not solve the problem of patient diagnosis,” Lipson said.

Another problem is high costs for patients, said Zhang Yusheng, founder of Xingshulin, a mobile medical education platform for physicians. The issue was recently drawn into the spotlight by the blockbuster film “Dying to Survive,” which tells the story of a man who smuggles generic cancer drugs into the country for patients who can’t afford brand-name treatments.

Beijing United Family Hospital is considered one of the country’s best and most efficient health care providers, but its patients must pay around 20,000 yuan ($2,915) each year to receive its comprehensive package, which includes regular examinations and preventive care, as well as insurance. This level of care is far beyond the reach of most Chinese people, considering the fact that the average person in China spent only 3,712.2 yuan on health care last year, according to figures from the National Health and Family Planning Commission.