China Passenger Vehicle Sales Down for Second Month in August

By Mo Yelin and Liu Yukun 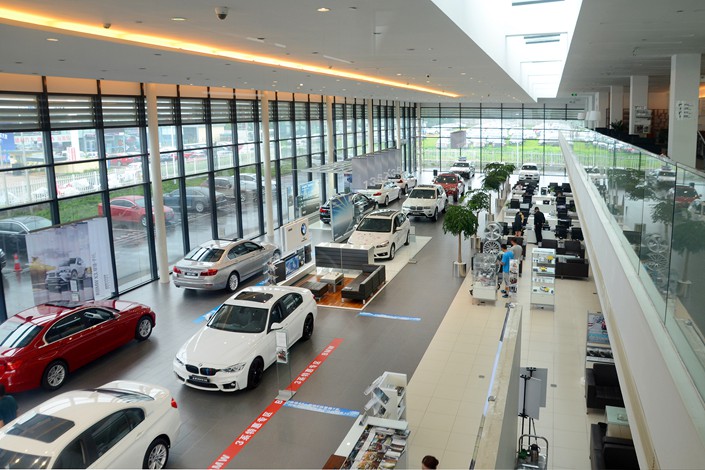 Cars for sale are displayed at the auto market in Rizhao, Shandong province, on Aug 12. Photo: VCG

China’s car sales were down for the second month in a row in August, as market saturation and flagging consumer confidence threaten to dampen growth in the world’s biggest auto market through year-end.

Retail sales of passenger vehicles — cars, SUVs and minivans — in China for August were 4.6% lower than they were a year earlier at 1.79 million units, following a 5.3% year-on-year drop to 1.89 million units the previous month, according to the latest figures (link in Chinese) published by the China Association of Automobile Manufacturers (CAAM), a government-backed industry group, on Tuesday.

Passenger-car sales for the eight months through August rose 2.6% to 15.19 million units.

Falling consumer confidence may have been the main reason for the sluggish performance, said Xu Haidong, the association’s assistant secretary-general. In smaller Chinese cities, where most sales growth originates, demand from consumers who tend to be more price-sensitive has plummeted, Xu said.

This is especially the case for SUVs, the popularity of which has driven China’s car demand for years, with sales of the vehicles dropping 4.7% last month.

The market stagnancy comes against the backdrop of escalating U.S.-China trade tension that has seen the two countries hike their automobile import tariffs. In July, Beijing lowered its car import levy to 15% from the previous 25%, but it later lifted the rate for cars coming from the U.S. to 40%.

Car imports, which mainly involve higher-end premium models, contribute only a small proportion of China’s car sales. But industry experts said the intensifying trade tension between the U.S. and China could cause greater pricing uncertainty, which is likely to further damp consumer confidence.

This sluggishness seems likely to continue for the rest of the year. The China Passenger Car Association, another government-backed industry association, has revised its estimate for the years’ sales to a 1% decrease from 2017 — down from a 4% increase it had previously predicted.

However, sales of the electric cars have seen a significant increase — and are expected to experience further growth — as the Chinese government continues to boost the sector through various incentives, including subsidies.

In August, a total of 101,000 units of new-energy vehicles, including those using electric battery, hybrid and hydrogen fuel cell technology, were sold in China — a year-on-year growth rate of nearly 50%.