By Peng Yanfeng and Bonnie Cao 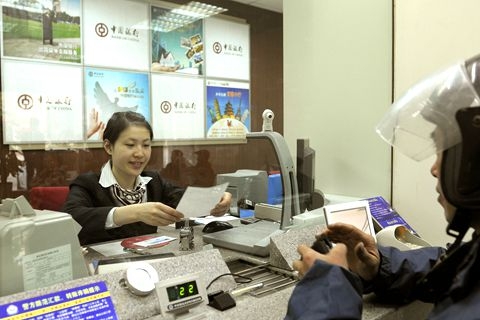 Bank of China spent 23.4 billion yuan on wages, bonuses and allowances for its 305,600 employees in the first half of this year. Photo: VCG

Executives of Bank of China’s (BOC’s) Guangdong branch may soon take a pay cut to compensate lower-income employees, reflecting growing pressure on traditional lenders, according to an internal document obtained by Caixin.

Under what it is calling Plan 1045, the Guangdong branch of BOC, one of China’s big four state lenders, for the first time set the minimum annual wage of employees at 100,000 yuan ($14,600), according to the document dated Sept. 20.

The bank’s executives, led by President Li Ruiqiang, will take a 10% reduction in their annual paychecks to compensate lower-income staff, the document said. Other bank officials, based on their levels, will take cuts of as much as 5%.

The initiative will be mainly carried out on a voluntary basis, the BOC Guangdong branch said in a reply to Caixin. The bank will increase its operation revenue to raise compensation with a focus on lower-level employees, it said.

The plan, the first of its kind in the bank’s history, will start in October for the following 12 months. Although the pay cut is said to be voluntary on paper, it is likely to be carried out as a mandate, according to people close to the bank.

Guangdong BOC’s compensation plan comes at a time when the revenue of China’s banking industry has been overshadowed amid rising competition especially from the growing online finance sector. Cost and expense cuts or even layoffs are inevitable, according to a person familiar with the matter. The wages and expenses of BOC’s Guangdong branch have declined for three consecutive years and the branch is losing lower-level employees, according to the document.

No other banks have yet followed suit.

Bank of China, the country’s fourth-biggest lender, spent 23.4 billion yuan on wages, bonuses and allowances for its 305,600 employees in the first half of this year, according to an interim report. The average compensation of the bank’s employees was about 76,600 yuan in the first half. That was much lower than the average of 169,500 yuan at Citic Bank and 194,500 yuan at China Merchants Bank.

BOC revenue rose 1.29% in the first half 251.4 billion yuan from a year ago, while net come increased 5.21% to 109.8 billion yuan, according to the interim report. Growth was the slowest among China’s four biggest state-owned banks.